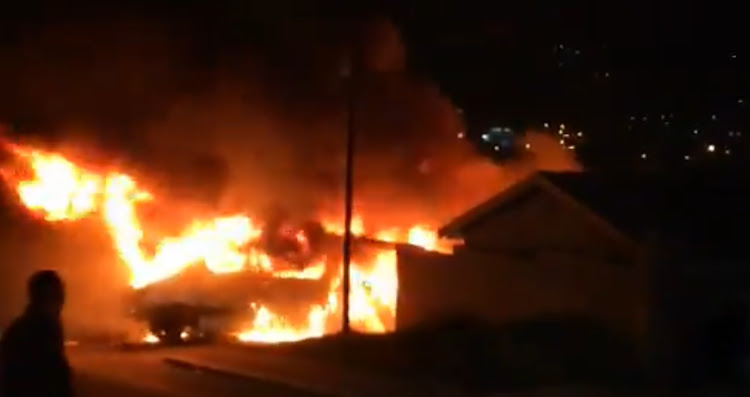 A screenshot from a video shows a taxi on fire at a home in Newlands West, outside Durban, on Tuesday evening.
Image: Supplied

A fire which broke out shortly before 9pm on Tuesday destroyed three taxis and a truck on a property in Newlands West, outside Durban.

Divisional commander of eThekwini Fire and Rescue Bruce de Gier said no one was injured.

A fire which broke out at a property in Newlands West, Durban, on Tuesday evening destroyed three taxi's and a truck which had been parked on the property - there was minimal damage to the home. Police say no case has been opened. @TimesLIVE video @marshall_sec pic.twitter.com/v3dspHoa2z

"Our members received a call about a fire at a property just before 9pm. When they arrived at the scene, four vehicles, which had been parked on the property, were engulfed in flames."

He said the property owner was not at the scene and they were unable to establish who owned the vehicles.

De Gier said the fire was extinguished and there had been minimal damage to the home.

Provincial police spokesperson Lt-Col Thulani Zwane said police were notified of the incident. However, no case was opened.

One person died in a shack fire in Khayelitsha, Cape Town in the early hours of Tuesday morning, the City of Cape Town said.
News
1 year ago

A supermarket in a small KwaZulu-Natal resort town has gone up in flames.
News
1 year ago

A woman died in a shack fire in an informal settlement in Cape Town in the early hours of Sunday, the city's fire and rescue service said.
News
1 year ago