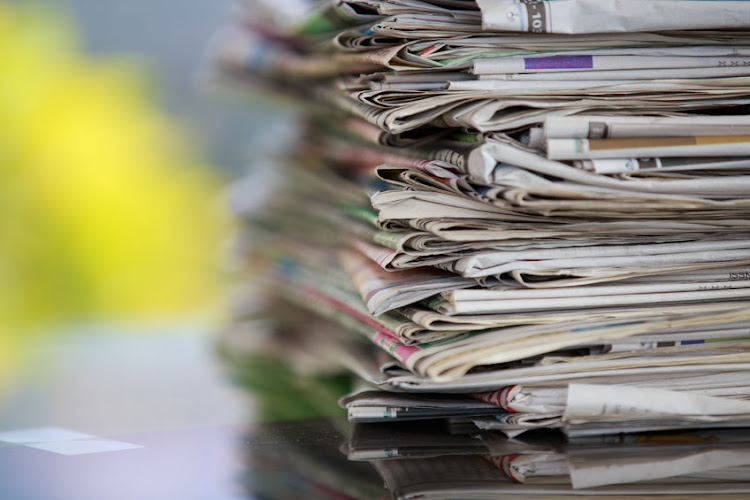 An external audit into Independent Media has shown that the company inflated its circulation figures for more than a year.
Image: Wathanyu Sowong/123rf

An external audit into Independent Media has shown that the company was inflating its circulation numbers for more than a year, with one publication incorrectly claiming up to 12,000 extra sales.

The Audit Bureau of Circulations of South Africa (ABC) released a notice at the beginning of July stating that during a routine check audit, the majority of Independent Media’s newspaper titles, including The Star, the Diamond Fields Advertiser, the Cape Argus and the Cape Times, had contravened the rules.

This happened in the number of copies distributed at schools across the country between the first quarter of 2017 and Q1 2018.

ABC general manager Charles Beiles explained that Independent Media, of which Sekunjalo group boss Iqbal Survé is chairperson, used external auditors for its data and that his organisation decided to ensure the data was correct.

He explained it was common practice for media houses to distribute newspapers at schools, but that outside sponsors were required to cover the costs of such distribution.

However, during the five quarters examined by the ABC, the newspapers had included these numbers in their circulation figures, despite not having a sponsor.

He said while at some publications there had been no sponsor, others within the same corporate group had been brought on to provide sponsorship.

That meant the company had essentially sponsored itself, which was against the rules of the organisation. Beiles declined to comment further.

However, he said: “Since Q2 2018, the situation has been corrected, and no further adjustments are necessary.”

The audit found that during the affected period, the biggest offender, The Star, had estimated between about 10,000 and 12,000 extra circulation a quarter, an increase of between 13% and 14%.

Media Monitoring Africa director William Bird said he now understood why Independent Media had initially appeared to not have been hit as hard by a drop in circulation compared with other print titles.

But Bird added he was willing to give Independent Media the benefit of the doubt, saying it could have been an error due to the loss of senior, experienced management at the company.

A company with such a long history should know how the system works – but if there’s evidence it was intentional, this becomes a very serious matter.

“A company with such a long history should know how the system works, but if there’s evidence it was intentional, this becomes a very serious matter,” he said.

He said circulation numbers were important to advertisers selling products within each publication.

“A bigger audience means you would be able to charge more (for advertising) … If you lose readers, you have to drop rates accordingly,” he said.

Independent media and marketing analyst Sandra Gordon agreed, saying advertising agencies used ABC figures to pitch rates to their clients. She said many clients would be looking at the reach of a newspaper, and circulation was one way of determining that, alongside readership of each product.

Gordon added that many advertisers preferred circulation figures to reflect the number of people who paid for products, rather than copies handed out free.

“In practice, you should adjust [advertising] rates if circulation goes down, though it doesn’t always happen,” she said. 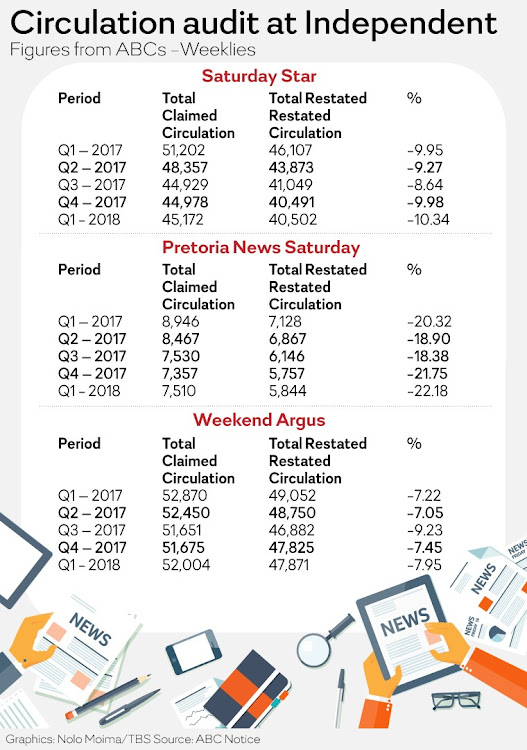 Gordon said other media companies had been caught altering their ABCs in the past, and were then forced to reimburse their advertisers. Regarding the current situation with Independent’s figures, she said she did believe the company’s advertisers could have a claim to some form of compensation.

Association for Communication and Advertising CEO Mathe Okaba said even a slight inflation of circulation figures could be disastrous for a media company’s credibility. That was because the figures were used to determine readership at advertising agencies.

“If [a media company] charges too much, it impacts on our industry, agencies and deliverables. What is important is media owners understand that if they’re doing this, it impacts on their credibility. We lose faith in you; why would I come back to you?” she said.

Independent Media’s head of circulation, Anesh Ramjith, said it was completely incorrect to suggest the company’s circulation figures had been inflated.

“The copies in question are PMIE copies [Print Media In Education], which form part of the group’s corporate social investment initiative, as we aim to promote literacy in schools in previously disadvantaged communities. Upon review of the numbers, ABC did not agree with the inclusion of these copies as sales below 50% of the cover price, as they were sponsored by a group entity as part of our broader CSI initiatives. ABC rules state such copies should be funded by third parties and not via the group,” he said.

The offer by Iqbal Surve’s Sekunjalo to buy the PIC’s stake in Independent Media at almost double its book value was conditional on the PIC investing ...
Business Times
3 years ago

Sekunjalo, the company owned by controversial businessman Iqbal Survé, on Tuesday said it had not yet received back the cash it donated to the ANC.
Politics
3 years ago