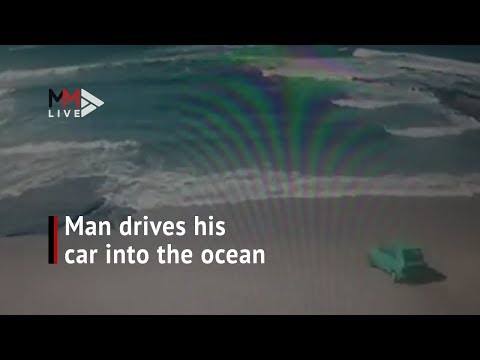 It was an ordinary Monday at Shelley Beach on the KwaZulu-Natal south coast, until a man drove his car into the ocean.

Beachgoers were left gobsmacked when the unknown man sped into the sea as part of a dare by a friend.

Closed-circuit television footage from the Shelley Beach ski-boat club captured the unknown man - believed to be from the Free State - driving a green Golf at high speed into the ocean.

Brenda Johnson, a secretary at the ski-boat club who witnessed the daring act, said the man had attracted a large crowd around 1pm.

"He just drove straight into the ocean," she said.

"Initially I heard it was a suicide attempt, later it was established that the man was dared by a friend to drive his car into the sea.

"He walked out unhurt. It wasn't very deep but the waves were much more powerful than his Golf."

Johnson said paramedics and police arrived on the scene. The car was towed out of the ocean by a local tow-truck company as the man did a disappearing act.

"The police impounded the vehicle because there was no licence disc on it. We have no idea who the man is. All we know that he is from the Free State.

"He just walked off like nothing happened," said Johnson.