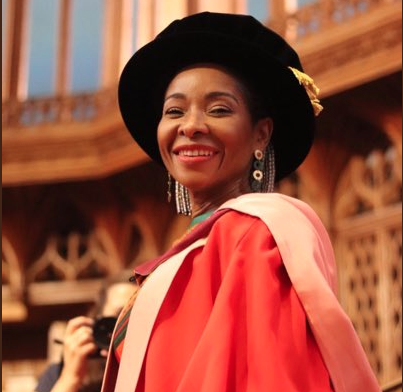 University of Cape Town vice-chancellor Prof Mamokgethi Phakeng has dedicated her honorary doctor of science degree from the University of Bristol to the people who contributed to her life and career.

Phakeng was one of 11 women to receive an honorary degree from the university in a ceremony in Bristol, England, on Monday.

While addressing graduates and academics, she said there were people during her career who had contributed significantly to her reaching this point.

"This is a recognition of the many people who made me, those I represent, the many young boys and girls all over the world, especially in my home continent of Africa, living in poverty and wondering if things will ever get better."

Watch the three clips below:

Phakeng, who was joined by her mother and three sons on her trip, said she hoped the honour would show that anything is possible with hard work and consistency.

"To succeed in the real world, you must be willing to start at the bottom. These days everyone wants to be an overnight success. But starting at the bottom makes you hungry and determined.

"It is also a great way to find out, hard as it may be, that you are not as smart as you think you are. Starting at the bottom is the best way to learn," she said.

Inspirational words from the University of Cape Town VC, Professor Mamokgethi Phakeng, to our graduating students 📣

She's joining them here @wills_memorial and will shortly be an honorary #BristolGrad!

We are about to go into the hall for the ceremony now. It starts in 20min. Get live streaming here: https://t.co/MDJf4OSqXA pic.twitter.com/w4yxd5JB2K

UCT's vice-chancellor went to Paris and snapped selfies with the president!

Mamokgethi Phakeng, the selfie-loving vice-chancellor of the University of Cape Town, has two new presidential pictures for her collection.
News
3 years ago

Mzansi to UCT 'deputy mother' Mamokgethi Phakeng: 'You are not mediocre'

UCT vice chancellor Mamokgethi Phakeng has received an outpouring of support as tweeps reminded her to go easy on herself.
News
3 years ago

The appointment of the University of Cape Town's third deputy vice-chancellor means the institution's four top academics are all women.
News
3 years ago