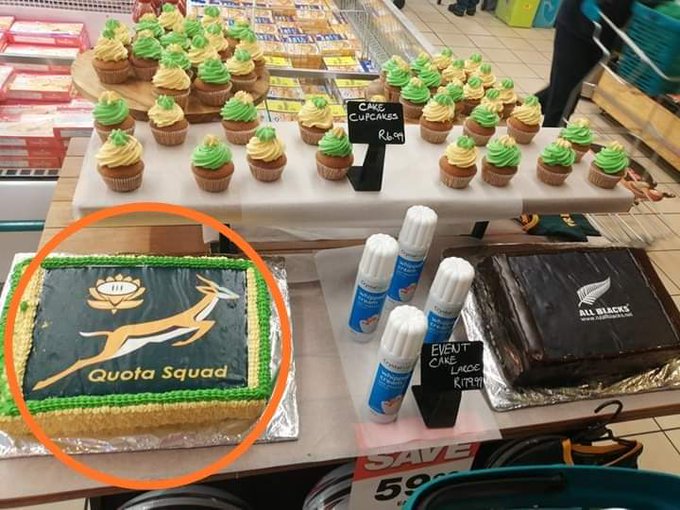 Checkers has apologised about a cake perceived to be insulting to black and coloured members of the Springbok team.
Image: Phumi Hlati via Twitter

Social media pundits are calling for a baker's head to roll as anger continues to simmer over an offensive rugby "quota cake" spotted at a Checkers store in Cape Town.

Nathan Colbe posted a photo of a Springbok-themed cake on display at the store in Protea Heights. The text that usually reads "Springboks" was replaced by the term "quota squad" - a jibe perceived by many to refer to the number of black and coloured players who make up the Springbok team.

Checkers swiftly apologised for the jibe over the weekend, but the retailer was still dealing with complaints about the cake via social media on Monday.

Checkers said in a brief statement that the cake was the work of an individual employee and that the sentiment was not  supported by the retailer.

"Checkers distances itself from the message included on a Springboks cake displayed in a store on Friday, and confirms it was immediately removed when brought to branch management's attention," the company said.

Herschel Jantjies’s 80th-minute try secured a well deserved 16-16 draw for the Springboks against the All Blacks at the Westpac Stadium in Wellington ...
Sport
2 years ago

"It was a bad decision taken by a bakery employee and does not represent the supermarket chain's view."

But the effects were still being felt on Monday.

"This is what CheckersSA think of the black players in the Springbok team. It’s disgusting and the people responsible for this must be held to account," wrote Twitter user Jacques Cupido.

"When there are so many wounds and scar tissue due to racism in South Africa, why would CheckersSA allow this? Are you telling me management didn’t know what was going on in their store and a customer had to call them out?"

In Wellington, New Zealand, the Springboks rallied to a 16-16 draw with the number one ranked team in the world on Saturday.

Many on social media were quick to point out that last week's match-winner against Australia and try-scorer against the All Blacks, Herschel Jantjies, was one of the players who made up the required quota structure.

"And who is scoring the tries?" asked Facebook user Randolph Bailie, while user Litha Kama said: "It's funny how the 'quota squad' play a big part in the success of the Bokke today".

Chaos broke out on the public stands of Ellis Park Stadium when spectators realised they were sitting next to rising Springbok star Herschel ...
Sport
2 years ago

The V&A Waterfront in Cape Town apologised on Tuesday evening to DA MP Phumzile van Damme following an incident earlier in the day where Van Damme ...
Politics
3 years ago

AfriForum have threatened to take Netball SA (NSA) to the Court of Arbitration for Sport (CAS) in Lausanne if they don’t abolish racial quotas when ...
Sport
3 years ago