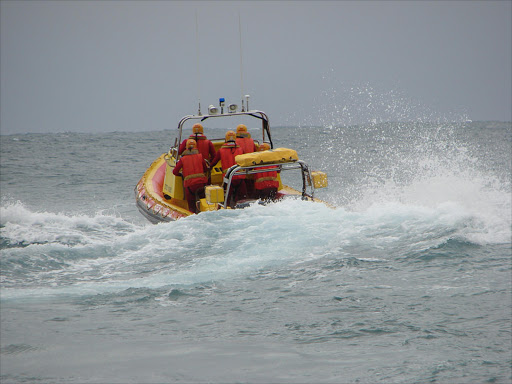 The National Sea Rescue Institute in Richards Bay was informed about an abandoned fishing trawler between SA and Mozambique
Image: Flickr/NSRI

Mozambican and South African maritime authorities are trying to piece together how an abandoned fishing trawler ended up capsized on the east coast.

The National Sea Rescue Institute (NSRI) said on Monday morning that its Richards Bay team was notified on Friday by a dive charter crew that an overturned fishing vessel was afloat "approximately 10 nautical miles offshore between Ponto do Ouro, Mozambique, and Kosi Bay, on the KwaZulu-Natal coast".

"Divers had dived on the wreck and found no identification on the trawler which appears to have been afloat in the capsized position for a long time due to the dilapidated state of the wreck," said the NSRI.

According to the NSRI, both South African and Mozambican maritime authorities were asked to broadcast "a maritime navigational hazard alert".

"On Saturday morning NSRI Richards Bay was informed that the wreck had beached on Friday night along the shore in the vicinity of Ponto do Ouro, Mozambique ...

"It remains unknown the origin or the identity of the trawler."

Fisherman rescued after shark bites him aboard trawler

A shark which had been caught in fishing nets bit the arm of a crewman on a trawler sailing off the coast of Port Elizabeth as he tried to free the ...
News
3 years ago