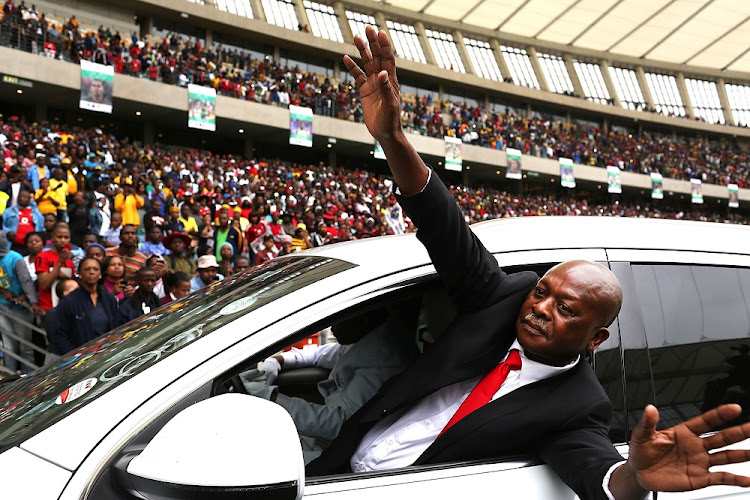 Sam Meyiwa loved this image so much, he saved it to his Facebook profile. The photograph was first published in The Times newspaper on November 1, 2014 after the memorial service in Durban's Moses Mabhida Stadium of Orlando Pirates and Bafana Bafana star Senzo Meyiwa, who was shot and killed in Vosloorus.
Image: ALON SKUY. © The Times

Samuel Meyiwa died on Monday after suffering a second stroke.

The father of murdered soccer player Senzo Meyiwa was in ill health following a major stroke in August 2018.

Family spokesman Nathi Ngwenya told TimesLIVE that the family was in a state of shock about Meyiwa’s death but a statement would be issued during the course of the day.

He said Meyiwa died in the early hours of Monday at his home.

“The family is still confused and shocked. He was in a very bad shape since he suffered a stroke. He never fully recovered. His wife is in a bad state and is still very shocked,” he said.

Ngwenya said it was still too early to talk about funeral arrangements but the family would issue a statement in that regard.

One of Meyiwa's final posts on Facebook related to his ongoing appeals for his son's killers to be brought to justice.

Senzo Meyiwa was gunned down in Vosloorus, east of Johannesburg, at the house of his girlfriend Kelly Khumalo on the night of October 26 2014 in an alleged botched armed robbery.

In January this year, police minister Bheki Cele vowed police would make a breakthrough "in the not very distant future" and catch his killers.

TimesLIVE Sport previously reported that the goalkeeper had made 157 appearances for Pirates and won seven caps for the senior national team.

The 2013-14 season would prove to be Meyiwa ’s finest in his career, as he played 51 matches in all competitions, including appearances in the Caf Champions League, the sports team reported. His most memorable performance in the continental club competition was against TP Mazembe in Lubumbashi, where he stopped two penalties to help the Buccaneers reach the group stages. Pirates reached the final of the competition, only to lose to Al Ahly.

Tributes are being shared for the Meyiwa family on social media, with many expressing their sadness that they have not yet found out who killed the Pirates player.

Father of the late Senzo Meyiwa, Sam, has passed away this morning. RIP. 🇿🇦🇿🇦⚽

Very sad, he never knew who killed his son. 😢😢 pic.twitter.com/IArj22hXib

Sam Meyiwa must've died from a broken heart. That thing can kill you 😩

My heartfelt condolences to the Meyiwa family on the passing of Sam Meyiwa, may his soul rest in peace https://t.co/WBWT2mTfk8

Sam Meyiwa, father of the late Senzo Meyiwa has passed on this morning after suffering from the second stroke. He passed on without knowing who killed his son. R.I.P Mr Meyiwa ✊🏿✊🏿 pic.twitter.com/nBz1eAmuNl

The clock is ticking for police minister Bheki Cele to deliver on his promise he made to the family of slain Bafana Bafana goalkeeper Senzo Meyiwa to ...
News
2 years ago

I pray Senzo will now finally get a tombstone, says Sam Meyiwa

"Things just haven't been going right. Sometimes I don't even want to visit his grave because it is so embarassing." - Sam Meyiwa
TshisaLIVE
3 years ago