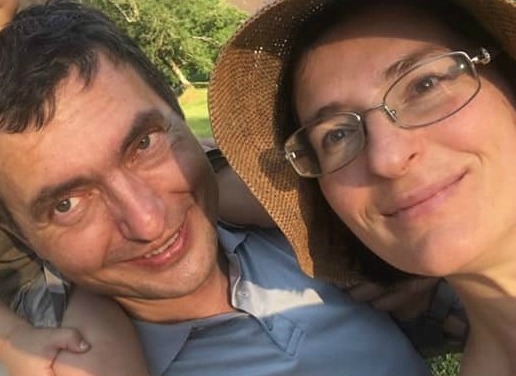 Tina Ivanov says she is 'numb' after the brutal murder of her husband, Ivan, in Cape Town at the weekend.
Image: Facebook/Tina Ivanov

The wife of slain Russian hiker Ivan Ivanov, who was killed on Saturday on a Chapman’s Peak hiking trail, said he was a “good dad and the most wonderful husband ever”.

“I thought it wouldn't happen to me, ever,” Tina Ivanov wrote in a Facebook post. “My husband was killed in Cape Town where he was on a business trip and stayed for two days to rest.

“He went to take a walk in the morning and was not far from the parking lot when they attacked. They robbed and killed him as he resisted. Police caught one … too bad there is no death penalty,” she wrote.

“I can't even cry ... I feel like I’m living in another dimension.”

Ivanov's son, Gleb, 20, told TimesLIVE that his 44-year-old father, whom he requested be identified as Russian and not Ukrainian, was "kind and generous".

"He did not eat meat, he supported financially all his family members, like me, his and Tina's parents and so on," he said. "Now we are all left to work hard, as I have just started working a month ago in the same company as my father, and his wife is looking out for [her son] Makar."

A man arrested after the fatal stabbing and robbery of a tourist on Chapman's Peak Drive in Cape Town appeared in the Wynberg magistrate’s court on ...
News
2 years ago

He said his father had failed to heed family warnings that the area was unsafe.

"Despite his awareness, he was quite reckless sometimes, and self-confident. He wanted to spend the last weekend to rest from work and enjoy his favourite activity - hiking in the mountains. He even wanted to take his daughter Taisia with him, but thank god Tina did not approve of her daughter going to such a dangerous place," Gleb said.

"I was very worried for him and always asked him not to walk there at all, especially alone. But he did not listen to anybody's warning. He liked Cape Town nature very much.

"He died for nothing, and now the lives of dozens of people, family, company members and even the three murderers that are going to spend their lives in prison are all ruined or gravely affected."

Gleb said he was glad his father had not made good on his promise to take the family to South Africa, adding that he hoped violence of this kind would be stopped.

"I know there are many people who came to put flowers at the scene. I hope there will be no more murders there. It must be a terrifying place to live for the locals."

Andre van Schalkwyk, from Table Mountain Watch, said as far as he was concerned, Table Mountain National Park was “out of bounds” to tourists and local hikers.

“The park is simply not safe,” he said.

A taxi driver was stabbed and robbed of his vehicle, allegedly by his two teenager passengers, in Goodwood, Cape Town, over the weekend.
News
2 years ago

“The message going out to tourists has to be clear - there is not enough security on the mountain and by going out there, you are taking your life into your own hands.”

Van Schalkwyk was one of the first responders to the incident. He said in all his years of work in emergency services, he had seldom seen such a gory crime scene.

“The manner of this killing is atrocious, they massacred him,” he said. “They cut him to pieces, and for what? A backpack? It’s the most disgusting, senseless behaviour.”

He said despite continuous calls for the city and the police to add more resources to mountain patrol efforts, nothing had been done.

“They made us big promises last year, but this year we are having the same conversation about violent crime on the mountain because nothing is being done.

“[Understaffed police] is a general problem in the country, it’s a general malaise in the way that the government has become completely dysfunctional,” Van Schalkwyk said.

“The mountain is now too dangerous to enter in small groups or even big groups. Criminals are not afraid. Last year we had a massive number of attacks and this year it’s growing to similar numbers.”

A Brazilian tourist had to be rescued from Table Mountain on Wednesday evening after she slipped on a wet path.
News
2 years ago

“We tried to bring law enforcement into the picture last year, as well as the police, and they made a promise to deal with the situation. Never happened. The tourism department said the same thing. Basically, what we’re understanding is that you're on your own.”

He said tourists should arrange security to accompany them.

Kerry Cross, from CCP security in Hout Bay, reiterated that policing of the area was severely understaffed, leaving neighbourhood watch groups and private security companies to ensure the safety of the area.

“The SAPS situation is crazy,” she said. “They need to have far more people deployed."

Cross added that the area included one of the province's largest townships, Imizamo Yethu, which had "only one tiny police station that is constantly under attack".

CCP were the first to respond to the incident, after a passer-by noticed three men "acting suspiciously" and used CPP's “Buzzer” app to notify the company.

“In areas like Imizamo Yethu, it is really difficult for people to give us their home address to respond to call-outs, but with this app we are able to see exactly where they are.”

She said the community was distressed about crime in the area and that the crowds that had gathered to pay respect to the slain Russian were testament to this.

“By all accounts he was a really lovely man,” she said. “Apparently he spoke four languages and was a really good guy. This community wants closure from the violence.”

Parliament's portfolio committee on tourism condemned the killing, saying in a statement on Monday that crime was affecting tourism badly.

"The portfolio committee on tourism sends condolences to the family of the deceased tourist ... and vows to do all in its power to co-ordinate activities to ensure that such heinous crimes against tourists are not repeated.

"We have noted from our interaction with inbound tour operators and South African Tourism, which is our marketing entity, that perceptions about crime in South Africa are hurting tourism.

"This, in turn, has a negative impact on the socio-economic benefits of the sector, particularly tourism’s contribution to gross domestic product, job creation and ultimately poverty alleviation."

Hiking up Table Mountain in heavy mist after work on Thursday, I saw an animal on the trail a few metres away, about the size of a klipspringer. But ...
News
2 years ago

A new hiking app aims to make all 1,300km of the Cape Peninsula’s hiking trails a lot easier to navigate and to keep explorers safe.
News
2 years ago