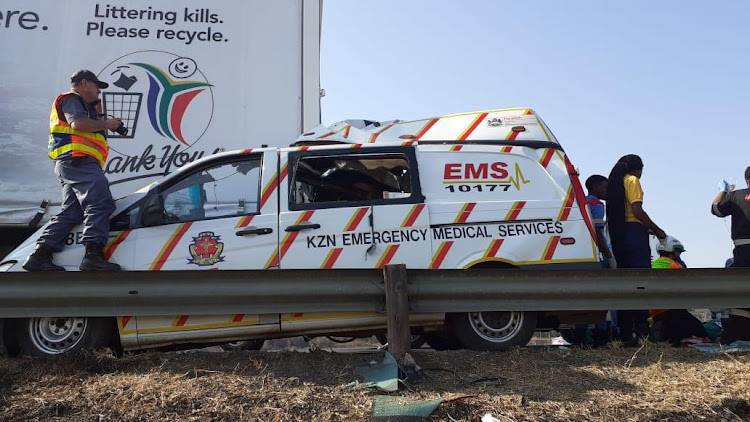 The scene of the crash on the N3 near Cedara
Image: Supplied

A paramedic and a patient died when an ambulance collided with a truck on the N3 near Cedara, KwaZulu-Natal, on Tuesday.

Con Roux, N3 Toll Concession spokesperson, confirmed to TimesLIVE that a KwaZulu-Natal Emergency Medical Services ambulance had been travelling towards Johannesburg when it collided with a truck.

"Unfortunately there have been two fatalities, one a patient and the other the driver of the ambulance. A third person, who was in the passenger seat, is being transported to hospital in a serious condition," said Roux.

Roux said traffic towards Johannesburg had been severely affected as the road had to be closed. However, it would reopen shortly, he said.

A private ambulance service, Emer-G-Med, says one of its employees was involved in a "vicious attack" by another ambulance worker.
News
3 years ago

Two KwaZulu-Natal emergency services paramedics have been left wounded after responding to a callout that turned out to be a trap.
News
3 years ago

A KwaZulu-Natal emergency medical services paramedic was held at gunpoint and robbed while attending to a patient in Phoenix, north of Durban on ...
News
3 years ago