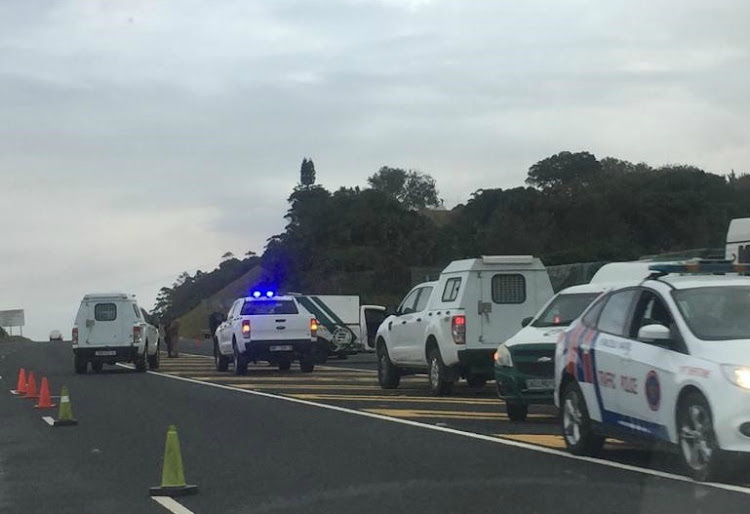 A security guard was killed when a Fidelity cash-in-transit vehicle came under fire in Hibberdene on the KwaZulu-Natal south coast on August 1 2019.
Image: Supplied

Six suspects have been arrested just hours after a foiled cash-in-transit robbery which claimed the life of a security guard in Hibberdene on the KwaZulu-Natal south coast on Thursday.

TimesLIVE reported that a Fidelity security guard was shot dead and two others were injured during a shootout with the suspects on Marlin Drive in the town's centre, about 6am.

The suspects intercepted the security guards just before they could offload pensioners' money at a business premises in the area.

A security guard was shot dead and another injured during a foiled cash-in-transit robbery in Hibberdene, on the KwaZulu-Natal south coast, on ...
News
2 years ago

Police confirmed that six suspects had been arrested for murder, attempted murder and attempted CIT robbery in Southport, south of Hibberdene.

"The police immediately instituted the 72-hour activation plan to hunt down the suspects. Within a few hours, the multi-disciplinary team comprising various units within the SAPS, and Hawks arrested six suspects in a house at Kwa-Madlala area in Southport. Three rifles and a pistol were recovered. The suspected getaway vehicle was also recovered in a ditch next to the N2 freeway near Port Shepstone," the statement read.

Police national commissioner Gen Khehla Sitole, welcomed the arrests and  conveyed his condolences to the family of the slain security guard while wishing the injured guards a speedy recovery.

Police arrested seven suspects, including a police constable, in Johannesburg on Thursday for allegedly plotting a cash-in-transit heist.
News
2 years ago

A dramatic shootout between a G4S armed guard and three thugs was caught by a CCTV camera outside the Caltex garage on Willowvale Main Road, in the ...
News
2 years ago

Three would-be cash-in-transit robbers were arrested just moments after trying to pull off a heist in Mamelodi West, Tshwane.
News
2 years ago