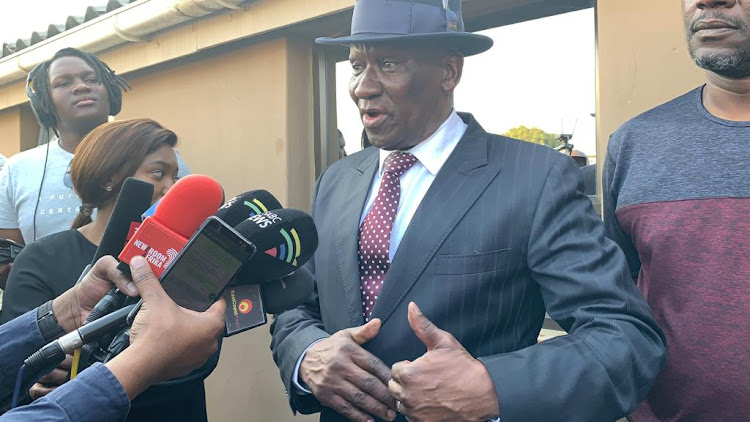 Police minister Bheki Cele has once again committed himself to securing an arrest in the 2014 Senzo Meyiwa murder case.

“The case is at a sensitive stage and Minister Cele has committed himself, once more, that an arrest will be secured in the Senzo Meyiwa case," said Cele’s spokesperson, Reneilwe Serero.

This comes after the minister visited the family at their Umlazi home, south of Durban, on Tuesday, following the death of Senzo’s father, Sam Meyiwa.

Meyiwa, 66, died in the early hours of Monday at his home after suffering a second stroke. He had been bed-ridden after his first stroke in August last year. He will be laid to rest at the weekend.

This is the second commitment Cele has made with regards to the former Bafana Bafana goalkeeper’s murder.

During a television interview in January, he said Meyiwa's death would be solved before Easter.

Meyiwa was gunned down in Volsoorus, east of Johannesburg, in the presence of his girlfriend, Kelly Khumalo, her mother, Ntombi, sister Zandi, Zandi’s boyfriend, Longwe Twala, his friends Mthokozisi Twala and Tumelo Madlala, and their son, Christian, who was four years old at the time.

In the build-up to Cele’s Easter deadline, Meyiwa's cousin, Siyabonga Miya, staged a sit-in outside police headquarters in Durban.

At the time, Serero said the minister was on track to deliver on his promise.

However, five years later, the police have achieved nothing in their investigation except the botched arrest of Zamokuhle Mbatha, who lives in Vosloorus, near Khumalo’s home.

At the Meyiwa home this week, Cele said he had briefed the family about developments in the case and was in daily contact with justice and correctional services minister Ronald Lamola about it.

Sam Meyiwa only wanted one 'gift': To know who killed his son. It was a gift he never received

Murdered goalkeeper Senzo Meyiwa's dad, Sam Meyiwa, was so desperate to find out who killed his son that he even made an impassioned plea to ...
News
2 years ago

Kelly Khumalo was blamed for Senzo's death and was dragged again after Senzo's father died on Monday.
TshisaLIVE
2 years ago