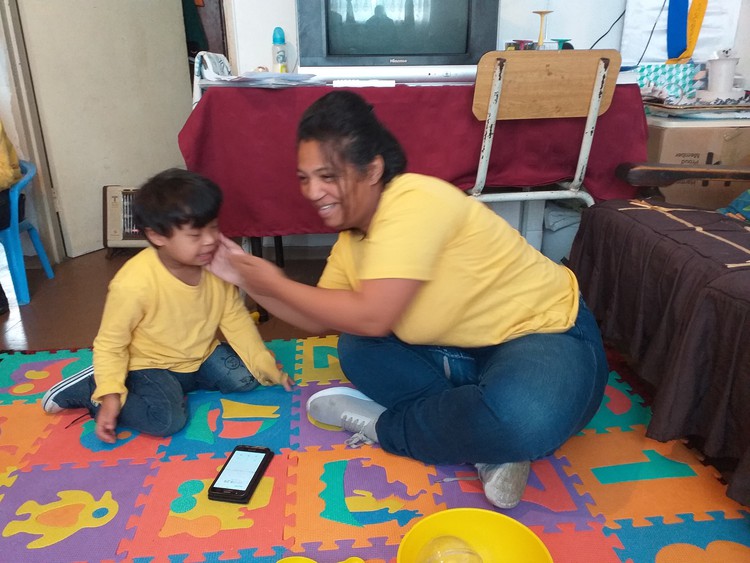 “I want to give Connor as full a life as I can. Even if it means fighting so he can go to the shop like anyone else,” says Liezel Haskin, whose son Connor has Down syndrome.
Image: GroundUp

A mom of three from Woodlands in Mitchells Plain, Cape Town, is heading to the Equality Court after her wheelchair-bound son was denied access into a local superette.

“I want to give Connor as full a life as I can. Even if it means fighting so he can go to the shop like anyone else,” said Liezel Haskin.

Her five-year-old son Connor has Down syndrome and some developmental delays associated with West syndrome. Connor requires around-the-clock care and he uses a buggy, a special-needs wheelchair.

Haskin has been visiting Save More Superette for over ten years and she could always access the store with Connor and his buggy. She relied on the store to buy day-to-day items because the shopping centre was far away. “Making use of public transport with a wheelchair is a nightmare. So something simple like going to the mall has to be planned,” she said.

In April Haskin went to the superette for some groceries. She was with her three children, including Connor. Her oldest is 13 and her youngest is still an infant. Upon entry, she was told she could no longer enter the store with Connor’s buggy.

Two members of the KwaZulu-Natal African-consciousness pressure group, the Mazibuye African Forum, have been ordered to pay a joint fine of R42,000.
News
2 years ago

Haskin said that despite explaining to the staff that she was a single mother and could not leave Connor without proper care, she was instructed to either “leave Connor in his buggy at the door or carry him while shopping in the store”.

“I was really angry because I had no one to leave my children with at the time. I refused to leave them outside the shop,” she said. Haskin said she began phoning around to support groups for children with special needs and even contacted the police for assistance.

The police explained that they did not deal with discrimination matters but accompanied her back to the store, she said.

“The manager told me, ‘Now you know for next time not to bring your child to the shop’. I didn’t know where to go or what to do but I knew Connor’s human rights had been violated. He should be allowed to go where everyone else can go,” she said.

A few days later, the store owner, Salaudin Khan, and two other staff members made an unannounced visit to her home. Khan apologised and left a slab of chocolate for Connor before taking a photo with him. “He said that people with prams and wheelchairs steal goods. I asked surely it’s not only people in wheelchairs stealing goods?” she said.

“The cashier who was with the owner asked why I’m making a big deal about this. A few days later, I walked passed the store and saw that they renovated it, purposefully placing isles so that wheelchairs and prams can’t go inside,” she said.

Khan told GroundUp that he was under the impression that the issue with Haskin had been resolved. “I went to the lady [Haskin] and apologised. I gave her a chocolate and we took a picture. I thought it was fine … Then a lawyer came with that letter. I asked why must I do these things if this is my store and I can decide who I want to allow inside. No one can tell me,” he said.

A paralysed 12-year-old who refused to take no for an answer when he wanted a bicycle is now eyeing his latest gold medal.
News
2 years ago

Khan explained that he was taking “every precaution” to protect his store from shoplifters. He said in May 2018, he lost almost everything when his store was looted and damaged during protests over housing in Woodlands.

“My store was closed for four and a half months after that. You can see the space in my shop is small, so what am I supposed to do?”

Khan said he has attempted to contact Haskin’s lawyer by phone to no avail.

When Connor was just over a year, he spent a month in ICU at Red Cross Children’s Hospital. Haskin became tearful as she recalled being told by doctors that her son would only have a few hours to live once removed from his ventilator. “I knew when Connor was diagnosed that it wasn’t going to be easy. But I also didn’t expect that people would be like this. I’m not asking for a handout. I am a paying customer like anyone else,” she said.

In the meantime, the incident had made its way to the National Council of and for Persons with Disabilities and was referred to the law firm Webber Wentzel.

Attorney Odette Geldenhuys has since taken Haskin’s case pro bono. On July 6, Geldenhuys sent a letter of demand to Khan, asking him to apologise in writing to Haskin; restructure the store to allow wheelchair access; pay R5,000 to Red Cross Children’s Hospital: Down Syndrome Support group and a R5,000 towards Connor’s next wheelchair.

“Our clients were hurt by the discriminatory conduct as it offended and insulted them … The discrimination violated the Equality Act, in particular section 9, which prohibits unfair discrimination on the grounds of disability,” read the letter.

Geldenhuys said Haskin’s matter was important because of the manner in which they were treated and the shop owner’s subsequent unresponsiveness. “Soon we will lay a complaint in the Equality Court,” she said.

Haskin said her aim is to spread awareness and educate people in her community about Connor’s disability. “Sometimes parents of a special needs child suffer in silence. We want them to be accepted … I was never guaranteed a day over one or two years old with Connor. I refuse to raise my child hiding inside my house.”

A car guard who found a diamond ring in the street is not saying finder's keepers and selling it for cash, as his self-respect comes from being a ...
News
2 years ago

The army is considering interim relief to allow a Muslim SANDF member to wear her headscarf.
News
2 years ago