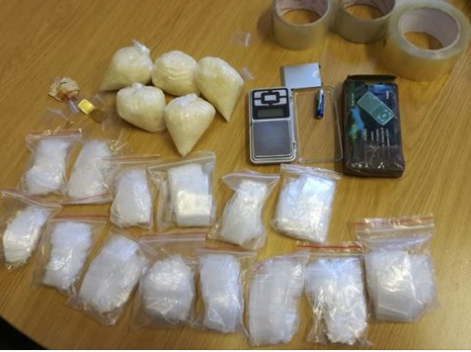 A youth at a Cape Town shopping centre who appeared to be "very nervous" was caught with a quantity of tik worth an estimated R150,000.
Image: Supplied by SAPS.

Police suspicions about a youth at a Cape Town shopping centre who appeared to be “very nervous” turned out to be well-founded, leading to them seizing a quantity of tik with an estimated street value of R150,000.

Western Cape police said officers attached to the Muizenberg SAPS were busy conducting “observations in a shopping a centre when a suspect was overheard reporting that there was a police vehicle in the vicinity”.

“The suspicious youth appeared to be very nervous and seemed to be on the lookout for police in the area. The member, Constable Julian Jacobs, called for backup and the station commander, Colonel Vassie Naidoo, who was doing crime prevention patrols nearby, responded to the call.

“The SAPS members approached the suspect and searched him. They found him to be in possession of five 100g packets of tik, worth an estimated street value of R150,000,” police said.

Members of the Rastafarian community in Butterworth have started selling dagga on the N2 between Mthatha and East London.
News
2 years ago

A 36-year-old woman was arrested in Durban for attempting to smuggle cocaine worth R4m into SA.
News
2 years ago