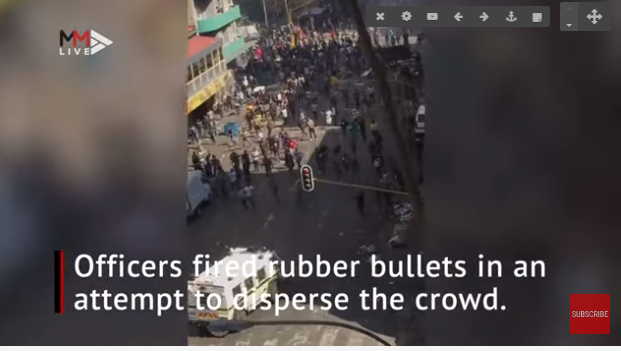 Police came under attack in the Johannesbrg CBD on Thursday when they attempted to confiscate alleged counterfeit goods from foreign shop owners.
Image: Screengrab from YouTube.

Police came under violent attack when they apparently attempted to confiscate alleged counterfeit goods from the shop owners.

Popcru said on Saturday that in line with the constitution, the police’s role was to maintain law and order and uphold the laws of the country while the role of citizens, whether local or foreign, was to abide by those laws.

“We strongly feel that the Thursday activity was coordinated and planned to detail, partly aimed at provoking and portraying police to be brutal and incompetent,” the union charged.

Law enforcement officials were attacked during a violent protest in the Johannesburg CBD on Thursday afternoon.
News
2 years ago

It commended its members for withdrawing from what it said was clearly a volatile situation that could have led to the unfortunate loss of lives or injuries.

“This was a demonstration of courage and sensibility on their part,” it added.

“Our members should always defend themselves when attacked, and must never allow lawlessness to take place within our communities, and this must be done within reasonable measures.”

Popcru called for policing stakeholders, government and small business representatives to convene and engage about such matters to avoid “the regrettable eventualities witnessed on Thursday”.

“We further call on our government to speed up dialogue in ensuring there are demarcated trading areas,” it said.

Meanwhile, the City of Johannesburg on Saturday urged residents to refrain from strewing rubbish on streets during protests, saying it placed a burden on the city’s resources as well as the wellbeing of affected communities.

MMC for environment and infrastructure services Nico de Jager said Pikitup had to double its working force and equipment to clean and remove large quantities of rubbish that was strewn all over the city’s streets by protesting foreign nationals on Thursday.

David Makhura won't tolerate 'abuse' of police: We will respond with full force

Gauteng premier David Makhura has made it clear he will not tolerate attacks he says have been launched on police officers by foreigners.
News
2 years ago

The South African Human Rights Commission has condemned the attack on law enforcement officials in the Johannesburg CBD on Thursday.
News
2 years ago