The family of Meghan Cremer, who has been missing since Saturday evening, has enlisted the services of a private investigator.
Image: supplied

A private investigator has joined the hunt for missing Megan Cremer, as day three of the search for the 30-year-old continues in Cape Town.

Meghan left her home on Vaderlansche Rietvlei farm in Ottery, where she keeps horses, by car around 6pm on Saturday, according to CCTV footage. She has not been seen since.

"You get a lot of weirdos calling at this stage of a search, so we want the family to remain out of the public eye as much as possible," said Pratten. "We would very much appreciate information, though. If members of the public are able to come forward, if they have seen Meghan, they should contact us."

Meghan's brother, Paul Cremer, who works with her at Woodstock Bakery, shared images on Facebook of her white Toyota Auris, registration number CX29727, alongside a link to a GoFundMe account that has been set up to help the family with the mounting costs of the investigation. 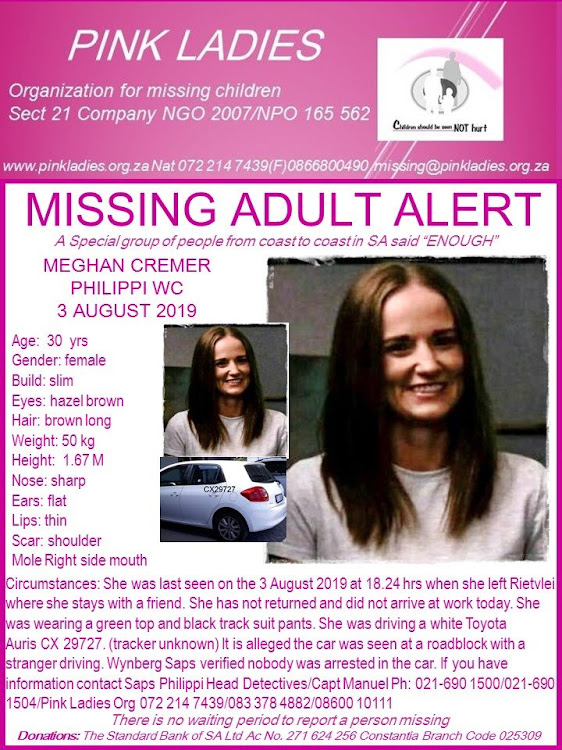 Cremer's friend, Linda Mohr, who also lives on the farm, said Meghan was "snuggled up and ready for bed", playing with her new dog, when they spoke by phone early on Saturday evening.

Mohr returned home later and found the dog outside and no trace of Cremer. Her mobile phone was switched off.

"She isn't the type of person to go out at night, not even just to the shops," she told TimesLIVE.

Cremer is an avid horse-rider and studied microbiology at Rhodes University.

Pratten said a friend of Meghan's saw her car being stopped at a roadblock in Wynberg, but it appeared to be driven by a stranger. The vehicle had not yet been reported stolen, so suspicions were not raised at the time.

A Pink Ladies flyer regarding Cremer has been widely shared online, with dozens of people praying for her safe return.

"I'm praying for her and your family, I hope she's found safely," wrote Sasha-Leigh Young on Facebook. "Have never met her but can't stop thinking about her. Am alert on the road as I drive a lot. Sending all the love and prayers your way."

'We just want her home': Search under way for missing Meghan Cremer

Friends and family are growing increasingly concerned about the safety of Meghan Cremer, who left home in Cape Town at the weekend and vanished.
News
2 years ago

The family of Gerco van Deventer are struggling to raise the $1.5m (about R22m) his captors are demanding for his release.
News
2 years ago