Africa's tallest building and the women behind it 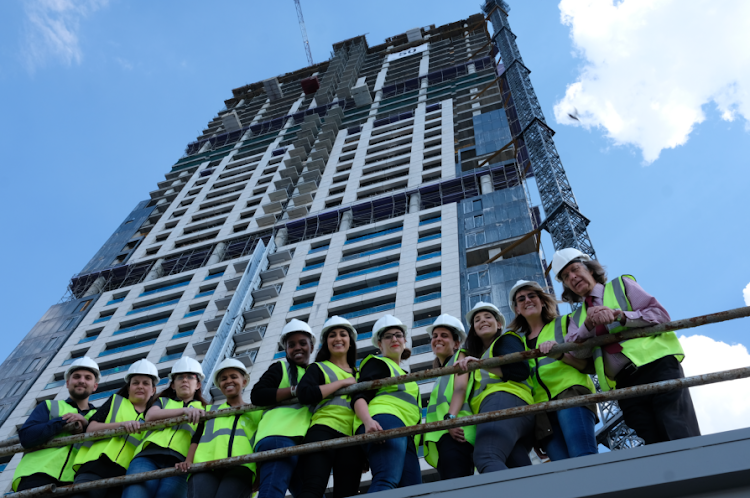 The Leonardo in the heart of Sandton, Johannesburg, not only owns the bragging rights to the title of Africa's tallest building but also boasts a predominantly women designer team.

Co-Arc International Architects director Catharine Atkins and architect Malika Walele are the leading women behind the 55-storey building on Maude Street, which was designed by Co-Arc’s emeritus partner, Francois Pienaar.

Expected to be completed this year, it will be home to luxury residential apartments, offices, shopping stores, restaurants and lifestyle recreation areas.

But working on the skyscraper has proved to be taxing for the women who often have to deal with cat calls and inappropriate behaviour by some of the over 2,000 construction workers.

Like a giant middle finger on the Sandton skyline, The Leonardo is 55-storeys tall.
Image: Co-Arc International Architects

According to the Co-Arc team, the fact that women made up the majority of the team was unnoticed until a recent photo opportunity.

The thought of an all-woman architect team doesn't sound groundbreaking until you consider only 21% of South Africa’s registered architectural professionals are women, according to the SA Institute of Architects in the Eastern Cape.

And the international community isn't doing much better.

The official launch of The Leonardo, Sandton's tallest building, is still under wraps - for now.
News
2 years ago

Unfortunately, our women architects are battling a lot more than just minority numbers.

Atkins, a founding partner of Co-Arc, with 23 years of experience under her belt, said her female architects battle harassment from the predominantly male construction teams they work with.

Walele has worked at the site for the last two-and-a-half years. Despite her position on the team she's had to stare down groups of men making inappropriate comments, turn down unwanted advances and shrug off sexism from some of the 2,000 workers at the site.

“It can get to you and affect your work at times if you don’t deal with it. Being assertive and dealing with these incidents is crucial for women, as this behaviour is typical of all construction sites all around the world,” Walele said.

Despite this Walele said she would encourage women to work in the industry.

“I love being on site, and the growth trajectory is huge. So much more than being in an office.

“I’d encourage any woman to do this. Unfortunately many women architects don’t believe they can, because it is so male dominated.”

There may be one upside to the inappropriate attitudes of her colleagues.

I’d encourage any woman to do this. Unfortunately many women architects don’t believe they can, because it is so male dominated.

Walele has noticed a shift in attitude from the foremen and managers on site who’ve witnessed the behaviour towards her first hand.

“It has opened their eyes and made them more sensitive and appreciative of the challenges women face, and may have a positive impact on the treatment of women on sites in future.”

“Once men become aware, it is easier to deal with incidents, and to confront someone if you need to.”

Atkins, the only woman among three male partners, said it has taken time for attitudes to shift outside the office.

“Yes, over the years you move your way up and you make yourself heard, and you secure the right to lead, but it’s a constant push,” she said.

So Atkins wanted to make a statement with her all woman team at The Leonardo.

For Walele, the Co-Arc team “is proof that women can change cities and create buildings that will be the tallest in Africa.

“I’ve never understood why architecture needs to be a male-dominated industry. Women are more than capable of doing this. It’s frustrating that more women in the industry aren’t doing it.”

See which jobs discriminate the most against Mzansi women

Women in SA earn on average 25% less than men.
News
2 years ago

Many women get no maternity leave pay at all, while very few get full pay

Fewer than two out of 10 women receive full pay from their employers when they go on maternity leave.
News
2 years ago