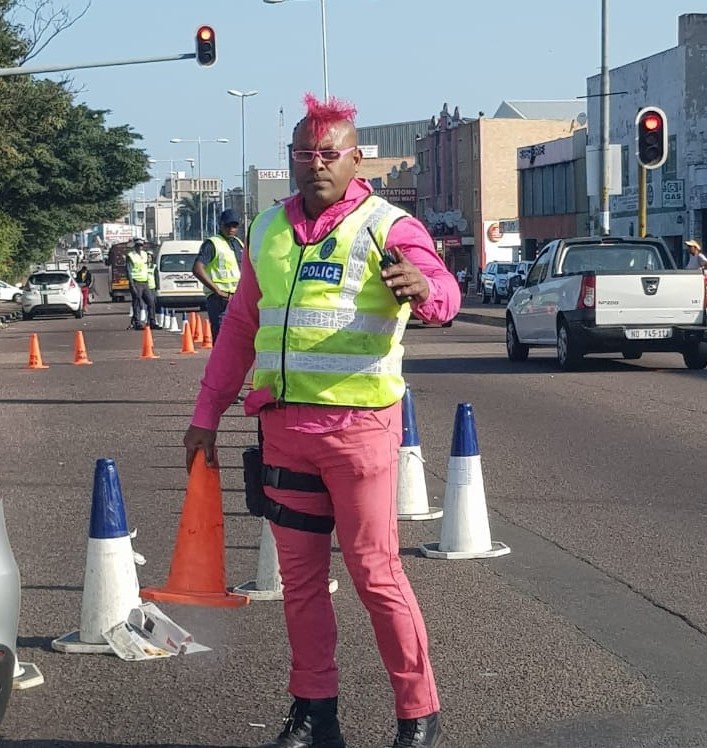 'Mr Pillay' - or 'India' to his friends - has an unusual way of dressing for an undercover cop. His sense of civic duty was his downfall recently when he caused a stir on social media while helping out at a traffic jam.
Image: Supplied

An “undercover” metro police officer caused a colourful commotion on social media this week when he was photographed dressed from head to ankle in pink.

If it weren't for his black boots, it would have been head to toe. He complemented his outfit with bright pink hair and pink glasses.

Metro police spokesperson Parbhoo Sewpersadh said the officer, identified as Mr Pillay but known as “India” among colleagues, had been performing crime-prevention duties near Moses Mabhida Stadium on Saturday when he jumped in to assist with traffic congestion at a busy intersection.

“There were two big sports matches at the weekend and members of our crime prevention unit were within the vicinity performing their undercover duties. The officer in question received a call from a member requiring assistance at an intersection of Masabalala Yengwa Avenue (NMR).”

Sewpersadh said when the officer arrived on the scene he found the trainee officer on duty had been struggling to alleviate the congestion.

“He saw traffic was heavily backed up and chose to help the trainee metro cop by putting on a reflective jacket and directing traffic.”

Sewpersadh said the member had been reprimanded about his dress code. He has since ditched the pink hair.

Safety 101 — paramedic duo get warnings for #Idibala performance while driving

The Roads Traffic Management Corporation (RTMC) has welcomed the decision to institute disciplinary action against two medical officers who recorded ...
News
3 years ago

Dance if you wanna: 5 times Mzansi's dance moves made news in 2017

There is one undeniable South African trait – the ability to dance, anywhere, to anything and under any circumstance.
News
4 years ago

WATCH | Cops caught on camera: The good, the bad and all the dance moves

When SAPS officers, metro police and traffic officers came under attack by members of the public this year the videos caused a national outcry.
News
4 years ago