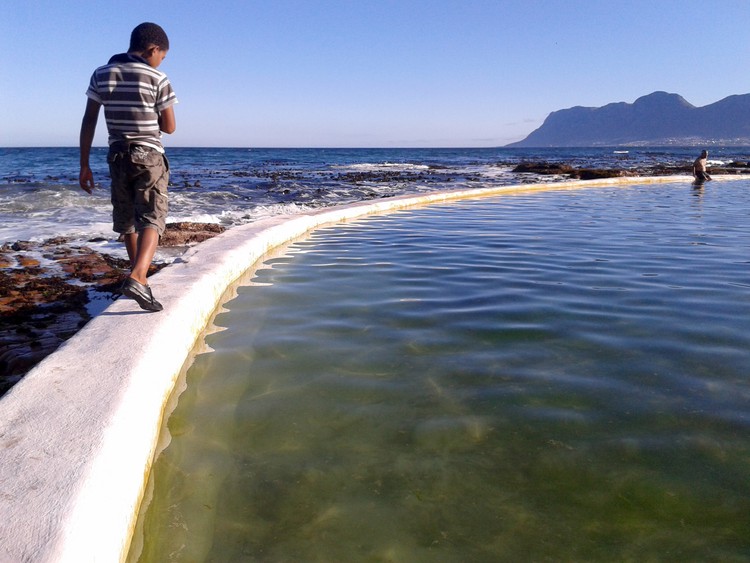 The draft Coastal Bylaw protects public right to access beach and coastal facilities, such as the Dalebrook tidal pool in Kalk Bay pictured here, but it is being criticised as draconian law enforcement.
Image: GroundUp/Steve Kretzmann

Owners of highly valued beachfront properties have significantly encroached on the public’s right to access beaches by extending the edge of their properties on to public coastal land, or blocking access paths, city officials said at a public participation meeting in Fish Hoek on Thursday evening.

Although city departments are still assessing the number of private properties encroaching on city beaches and the coastal zone to which the public has right of access, it was “a lot”, said environmental department manager Gregg Oelofse.

Speaking at the public participation meeting on the draft Coastal Bylaw, Oelofse said there were many properties in areas such as Clifton, Simonstown and Melkbosstrand where owners had extended beyond their erf boundaries and on to the public coastal area.

Head of coastal policy development Darryl Colenbrander said there was a stretch of 13 adjacent properties in Melkbosstrand, for instance, which had encroached on the beach. Colenbrander said he himself had been kicked by a private owner out of an area that was public city land.

WATCH | 'You run away to die sometimes': The underworld of Cape Town's stowaways

In and around SA’s harbours live the “beach boys”, an underground subculture of young men who seek better lives in other countries by hiding ...
News
2 years ago

It was an “inexchangeable principle” that the beach was “accessible public space”, said a committee member for the planning appeals advisory panel, Marian Nieuwoudt.

Nieuwoudt said the bylaw addressed the issue of encroachment and gave city officials enforcement capacity they did not have at present. 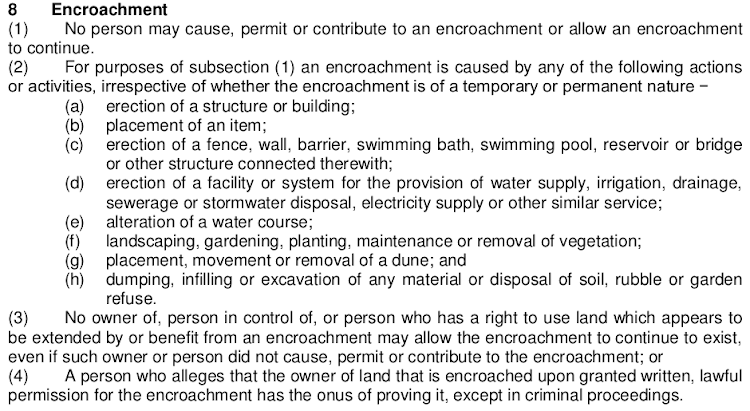 Many Capetonians will welcome the section of the bylaw that deals with encroachment.
Image: GroundUp

However, the wording of the bylaw in its current form hands the city potentially draconian powers, including the ability to prevent access to a beach, determine what times the public could access a beach, or charge a fee for access to the beach. This could be decided by a single authorised official. It also allows for an “authorised official” to issue a fine for use of “foul or indecent language”.

It further bans traders from selling goods at the beach, or buskers from providing entertainment unless they have written authorisation from the city.

Oelofse said the sections of the bylaw that allow the city to control access to the beach is only in case of an emergency or accident, or where safety measures need to be put in place if there is a stranded whale, for instance. He said references to an authorised official preventing access, determining times of access, or charging for beach access, refer to existing city-managed coastal facility or camping sites such as Soetwater or Silverstroom.

However, the draft bylaw notes entry to a coastal facility may be controlled by an authorised official, and the bylaw’s definition of a coastal facility includes “a beach”. So it would, as presently defined, allow the city to prevent, limit numbers to, or charge access to any beach.

Oelofse and Colenbrander said this was not the intention.

One member of the public at the meeting took issue with the “nanny state” approach of the draft bylaw, which outlaws foul language and allows the city to close coastal access in cases of severe weather or dangerous seas.

Section 16(h) of the new bylaw is unlikely to be adhered to by most Capetonians and visitors to the city.
Image: GroundUp

In its current wording, the city could prohibit surfers from paddling out when there were large swells if it deemed the sea too dangerous.

He said the city also needed to calculate the loss of amenity value by banning people from enjoying a beer at the beach after a surf, or sundowners on the rocks.

Oelofse said alcohol was banned from the beach as most drownings took place because people were inebriated, and excessive drinking was the cause of anti-social behaviour.But this was countered with the argument that drunkeness and anti-social behaviour should be banned, not enjoying a drink.

Although the ban on drinking on the beach is legislated in a separate bylaw, as noted by Colenbrander, the Coastal Bylaw would take precedence over other bylaws in respect of the coastal zone. It could overrule the Nuisance Bylaw in respect of allowing moderate consumption of alcohol, as well as hawking and busking on beaches.

A jogger was left bleeding after allegedly having a rock thrown at her on the walkway between St James and Muizenberg in Cape Town on Sunday.
News
2 years ago

Among management of other issues such as fishing and poaching, the bylaw outlaws pollution of the coastal zone. However, a number of concerned residents stated the city was the main polluter of the environment due to infrastructure failure resulting in cross- contamination of sewerage and storm water systems which flow directly into the sea. Further, three marine outfalls pump 37-million litres of sewage into the sea every day. This sewage is untreated except for being pumped through a sieve to remove  solid matter.

Questions were asked about how this bylaw would provide for recourse in cases where the city was responsible for pollution.

The head of nature conservation and the meeting facilitator, Bongani Mnisi, said comments and input on the draft bylaw were open until September 2. Residents must supply their comments, input, or objections in writing, either online through the city’s haveyoursay portal, or by sending an email to coastal.bylaw@capetown.gov.za

No public participation meetings are scheduled for sub-councils which do not include coastal areas.

The draft Coastal Bylaw is available at all libraries, and online here.

Beachgoers were left gobsmacked when a man drove his car into the ocean at Shelley Beach on the KwaZulu-Natal south coast on Monday, as part of a ...
News
2 years ago

Stab wounds are best cured in the sea. If you want to keep your surfboard, sleep on it at night. This is some of the hard-won wisdom of the homeless ...
Lifestyle
2 years ago

Disgraced Steinhoff boss Markus Jooste had no problem with the public buying his overvalued shares. But good luck accessing the public shoreline in ...
News
2 years ago