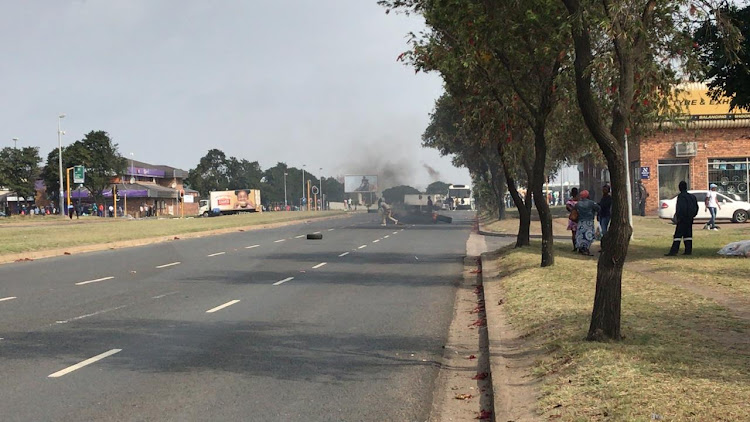 Protesters in Richards Bay blocked Bullion Boulevard, which runs through the CBD, with burning tyres on Monday.
Image: Supplied

According to a police officer who preferred to remain anonymous, the violence is linked to community members taking the law into their own hands by targeting "paras" - a colloquial name for whoonga (nyaope) smokers, who are often involved in petty crimes to feed their addictions.

It is understood that Monday's discord was a continuation of events which have been ongoing in the area since last month.

Angry Richards Bay community members took the law into their own hands on Thursday morning following the murder of a well-known bus driver.
News
3 years ago

In July, an angry mob of residents stormed the SMME Park, opposite the local taxi rank, where they proceeded to stone a building and nightclub that is understood to be a popular hangout for drug dealers and substance abusers.

Provincial police spokesperson Colonel Thembeka Mbele said police had to use rubber bullets and gas to disperse the unruly crowd on Monday.

"At 9am about 100 community members gathered in Richards Bay CBD. The police officers responded and a 32-year-old suspect was arrested after he was found in possession of a dangerous weapon," she said.

"Later a group of people gathered at the police station demanding the release of the suspect. Police had to use rubber bullets and gas to disperse the unruly crowd."

Members of the #RichardsBay community clashed with police earlier today following unrest linked to the ongoing issue of drug addicts in the area. The situation got tense when a protester was arrested and community members clashed with police demanding his release @TimesLIVE pic.twitter.com/wwERkoNUaO

Mbele added that during the commotion, two licensed firearms fell from people in the crowd.

"A total of eight suspects, aged between 27 and 57, were arrested for public violence," she said.

It is understood that calm has been restored to the Richards Bay CBD and all roads have been re-opened.

Two nabbed in Eastern Cape with 77,000 Mandrax tablets worth R5m

Two people were arrested after they were found in possession of mandrax worth R5m, Eastern Cape police said on Monday.
News
2 years ago

Residents of Orange Grove, Johannesburg, were stunned when they discovered coffins hidden in a house on Sunday morning.
News
2 years ago