Details of taking hostages, using human shields and possibly dying as martyrs were revealed in court as part of a bold plot by three alleged Isis acolytes to escape.

This was laid bare on Monday when Sayfudeen Aslam Del Vecchio‚ his wife Fatima Patel  and Ahmad “Bazooka” Mussa appeared before magistrate Irfaan Khalil in the Verulam Family Court.

The couple and Mussa have been charged with the kidnapping and murder of British-born Cape Town botanists Rod and Rachel Saunders. The elderly botanists are understood to have been murdered in February 2018 while in KwaZulu-Natal in search of rare plants and seeds.

Heavily armed metro and SAPS police stood guard outside as the entire court precinct was closed off to the public and court matters transferred to the magistrate's court across the road.

The Verulam Family Court was closed to court officials, the public and the media ahead of the bail application of an alleged Isis loyalist on ...
News
2 years ago

Senior state prosecutor Mahen Naidu made an application to have the matter proceed behind closed doors on Monday after a sketch detailing vital access points in and around the family court building was found on Del Vecchio during a raid earlier this year.

Naidu's application was based on an affidavit made by investigating officer Adriaan van Jaarsveld.

According to Van Jaarsveld's affidavit, on May 14 Del Vecchio was searched at Westville Correctional Centre  and found in possession of documentation and sketches, later identified as the building complex and surrounding area of Verulam Family Court.

The affidavit does not mention why Del Vecchio, who is now being held at Kokstad's Ebongweni “C-Max” prison - South Africa's most secure correctional facility - had been at Westville prison.

"The sketch marked vital access points in and around the family court building, access points, main roads and lookout points, which were an indication of a planned escape by the accused," said Van Jaarsveld.

This was not the first time that the court heard of an escape plot by Del Vecchio and his co-accused.

In August last year, TimesLIVE reported on an escape plot that would have seen the three attempt to overpower policemen and shoot their way out of the court building.

An audacious escape plot‚ which would have seen three alleged Isis acolytes overpower policemen and shoot their way out of the court building‚ was ...
News
2 years ago

Van Jaarsveld's affidavit confirmed this plot. "Intelligence has shown that the accused would not refrain from attacking the police, prosecutors and the judicial staff and would die as martyrs in the process, as per their ideology," he said.

He emphasised that the intended escape from court during proceedings would be done with the assistance of unidentified people.

"Intelligence indicates that there will be a considerable amount of violence and threats to make good of their escape attempt. The use of force by firearms and other related objects during the escape attempt will definitely cause serious harm, injury or fatalities to the public, police and court officials. The plan was to use to use human beings as shields and hostages in the attack," he said in the affidavit.

Both Patel and Del Vecchio told the court that they opposed the state's application to have the proceedings held behind closed doors.

"I think it is within the interests of justice that members of the public be allowed in court," said Patel.

Del Vecchio said he did not agree with the application and had a very good explanation regarding the sketch found in his possession.

"Many things that are happening in this court we don't agree with and the public should be aware on this," he said, adding that the drawing was part of a book he and his wife have been writing, detailing a fictional version of their story.

Naidu reaffirmed the state's application to have the matter heard behind closed doors and said the media would be allowed to cover proceedings. "We are letting in the press so they are reporting on the matter and informing the public. We don't want to let in unknown persons," he said.

Naidu said he failed to understand why Del Vecchio would have sketches detailing aspects of the court building as part of a fictional book.

Khalil granted the state's application and ruled that members of the public would no longer be allowed to sit in on the matter. "I am not prepared to risk the security of this court or its officials," noted the magistrate.

He adjourned the matter to October 30 for further investigation.

The court heard that Yusuf Cassim, who was seated in the gallery, would place himself on record and represent the accused. Cassim is also the instructing attorney in the case of Farhad Hoomer, the alleged mastermind behind the 2018 Verulam mosque attack and a series of firebomb attacks at retail outlets in the months that followed. 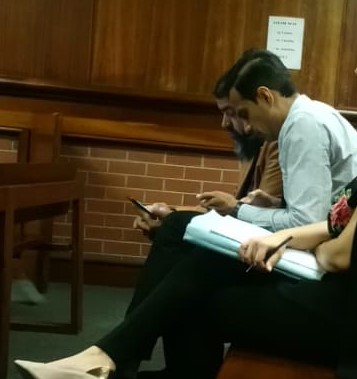 Hoomer appeared in the Verulam Magistrate's Court earlier on Monday, where voice experts were expected to provide feedback on voice recognition analysis from his electronic devices that had been seized by the state.

Torie Pretorius, senior state prosecutor and head of the priority litigation crimes unit at the National Prosecuting Authority (NPA), said the state was still busy with evidence in the matter.

Advocate Jimmy Howse, acting on behalf of Hoomer, said he was preparing an application to oppose the state's voice sample evidence, claiming that the sequence of events leading up to the state obtaining the voice samples tainted the investigations. He further questioned the qualifications of the voice expert.

Khalil postponed the matter to October 16.

Hoomer will be back in court with his 11 co-accused on September 30.

Investigators need to wade through five terabytes of data from 216 devices seized from 12 men accused of terrorist related activities in Durban.
News
1 year ago