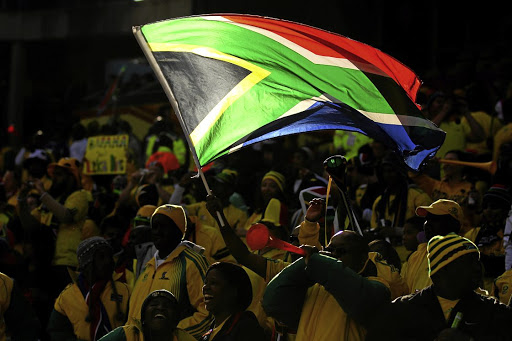 Gratuitous display of the apartheid-era flag demonstrates a total rejection of reconciliation and a clear intention to be hurtful and incite harm.

This is according to Gauteng deputy judge president Phineas Mojapelo.

In an equality court matter on Wednesday, he found that displaying the old flag constituted prohibited hate speech, discrimination and harassment.

Mojapelo made this ruling as he passed judgment in favour of the Nelson Mandela Foundation and the SA Human Rights Commission in their application that the display of the 1928 flag be classified as hate speech.

The application was triggered by the display of the old flag at the “Black Monday” marches, organised by AfriForum in October 2017 to protest against farm murders.

Passing judgment, Mojapelo held that reference to "words" in Section 10 of the Promotion of Equality and Prevention of Unfair Discrimination Act (Equality Act) must be given a generous and wide meaning.

"When regard is had to the interpretation of the act, 'words' in the section must be interpreted to include ideas, symbols and non-verbal meanings, including the waving of a flag."

Mojapelo said the main purpose of section 10 was prohibition of all hate speech, which could be communicated by forms of expression other than words.

The right freedom of expression is not an untouchable right and is constrained by other constitutional rights, which include the right to dignity and ...
News
3 years ago

If hate speech was only restricted to words, Mojapelo said it would mean victims of hate would not have recourse if the aggressor used non-verbal means.

Mojapelo also said speech was not limited to words, but extended to conduct and gestures, adding that displaying the old flag gratuitously caused more than emotional stress to black people. He said those who displayed the old flag sought to remind black people of the oppression they had moved away from.

The use of the old flag should be allowed for academic and other uses, if there was justification for it, Mojapelo said.

The Nelson Mandela Foundation had asked the Equality Court to declare that gratuitous displays of the old flag be constituted as hate speech, unfair discrimination and harassment based on race.

At issue was the definition of hate speech in Section 10 of the act, which restricted the type of expression which may constitute hate speech to “words”.

The Human Rights Commission supported the relief sought by the foundation.

The organisations also asked that if the court held that Section 10 of the act was confined to the expression of hate speech by words and not by conduct, the court declare the section unconstitutional in so far as it failed to prohibit hate speech by means other than words.

Mojapelo said in view of what he had found about the section he could not grant the declaration of constitutional invalidity of section 10.

As the Equality Court hears arguments to declare gratuitous displays of the old South African flag as constituting hate speech, a 75-year-old man ...
News
3 years ago

The legal conundrum surrounding the banning of displays of the old South African flag has escalated, drawing a range of figures and organisations ...
News
3 years ago

A man who unified SA has died.
News
3 years ago