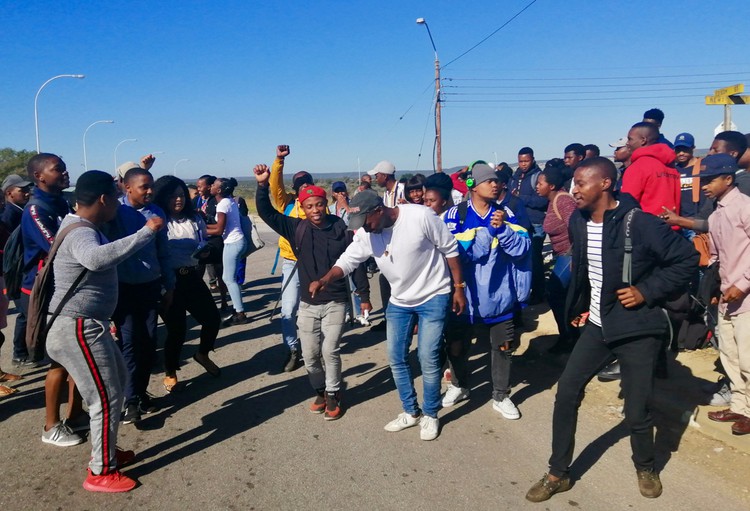 The students in Uitenhage were protesting against an 80% attendance policy to qualify for National Students Financial Aid Scheme (NSFAS) allowances.

Students who have fallen foul of the policy are demanding amnesty because they say they missed classes due to them receiving their NSFAS allowances late. They say they therefore could not afford bus fares to campus, GroundUp reports.

A student, who did not want to be named, said: “We burnt tyres yesterday (Tuesday) ... and when we arrived today (Wednesday) the gates were locked ...”

Secretary-general of the SRC Babalwa Blou said the 80% attendance policy applied to all eight campuses.

After a meeting with college management, Blou said it was resolved that students affected by the 80% policy should write letters stating why they deserved amnesty.

Students also protested in Makhanda. They also expressed concern over the 80% attendance issue, but the main focus of their protest was different.

SRC president Sabelo Madlala said students were concerned by the “continuous issue” of the college failing to facilitate practicals, which has been happening since 2017. Sabelo said according to the National Certificate Vocational syllabus, students are supposed to do “theory and practicals”, which is not happening.

Ashley Kasnel, a level 4 tourism student, said the protests were sparked when the college cancelled a practical trip to Cape Town. He said that the class was due to travel to Cape Town on August 25, but the head of the campus had not signed off on the trip.

Questions sent to NSFAS have not been answered.

College spokesperson Kate Oladimeji said the 80% class attendance policy is an instruction of the department of higher education and training, and that it had been communicated to the SRC.

On the issue of the practical in Cape Town, she said students were encouraged to attend practicals in the region, for example Plettenberg Bay, Port Elizabeth and East London. She said the college is complying with curriculum requirements.

Oladimeji said classes would resume on campus on Thursday.

Safety of students on and about campus, including the eradication of gender-based violence, will be a priority for the 2020 president of the ...
News
2 years ago