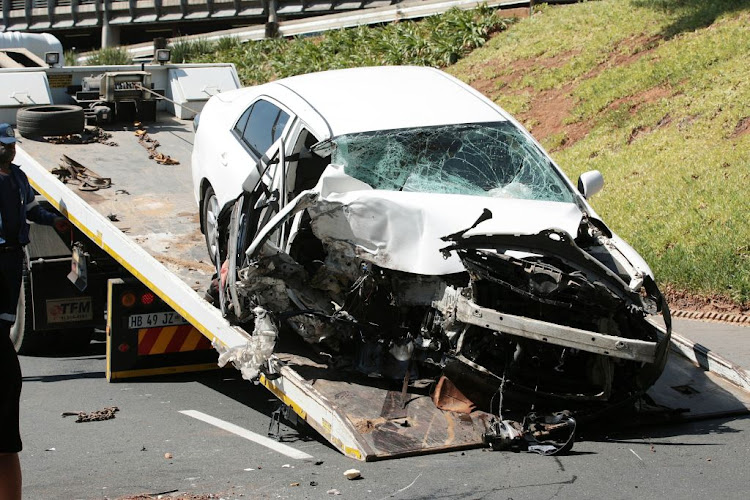 Bosasa chief executive officer Gavin Watson died when his car crashed into a concrete pillar under a bridge at OR Tambo airport on August 26 2019.
Image: Veli Nhlapo

Gavin Watson, who was killed in a car crash on Monday morning, kept no notes or records - his abrupt death is a major setback to investigations into the extent of Bosasa's role in the state capture scandal.

“It is known that Watson didn’t keep notes or records,” said James-Brent Styan, co-author of The Bosasa Billions, on Monday. “He didn’t have a computer or an office. The impact of his death on the Bosasa investigations is therefore immense. He was a central figure to uncovering the truth about all the allegations relating to Bosasa, and now he’s not here to tell his version of events. It’s a major setback for the investigation.”

The former Bosasa CEO crashed into the pillar of an overhead bridge just outside OR Tambo International Airport early on Monday. The front of the vehicle was obliterated by the force of the collision.

The Bosasa group won lucrative government tenders and was later deeply implicated during testimony at the inquiry into state capture. The company was also linked to a R500,000 donation to the CR17 election campaign

The Bosasa Billions book was described as the “first definitive account” of the Bosasa saga, in which Watson was a key role-player.

Styan described Watson as a complex character. “Depending on who you ask, you’ll either hear that Watson was an iconic struggle hero and a successful businessman or that he was the deeply corrupt leader of a state capture cult,” said Styan, who researched Watson’s Port Elizabeth roots and involvement in state capture.

Co-author Paul Vecchiatto said: “He, along with his family, played a pivotal and controversial role in the shaping of South African politics and business. We would have dearly wanted to see Mr Watson appear before the commission of inquiry into state capture to tell his side of the story, as we believe he had the most in-depth knowledge of all involved. Our sincerest condolences to his family and loved ones,” he added.

The DA called on police to “probe the circumstances leading up to the fateful accident”.

“The death of Gavin Watson may have a material impact on the work of the Zondo commission of inquiry into state capture. It is therefore vital, given SAPS stating that a case of 'culpable homicide' has been opened, that even a whiff of foul play is dispelled by a thorough and transparent investigation,” said party spokesperson Solly Malatsi in a statement.

“Angelo Agrizzi’s testimony, as well as the revelations by DA Leader Mmusi Maimane of the cosy and potentially corrupt relationship Bosasa had with the ANC and [President Cyril] Ramaphosa, indicate that Gavin Watson had a lot to say before the Zondo commission of inquiry,” said the DA.

Trade union leaders were also fair game for scandal-ridden Bosasa. One of them helped Gavin Watson's company land a lucrative - and irregular - ...
Business Times
2 years ago

'Utterly irrational, not based on law, inconsistent with facts' - Ramaphosa on Mkhwebane's Bosasa findings

President Cyril Ramaphosa has told the North Gauteng High Court that public protector Busiswe Mkhwebane got so much wrong in her report implicating ...
Politics
3 years ago