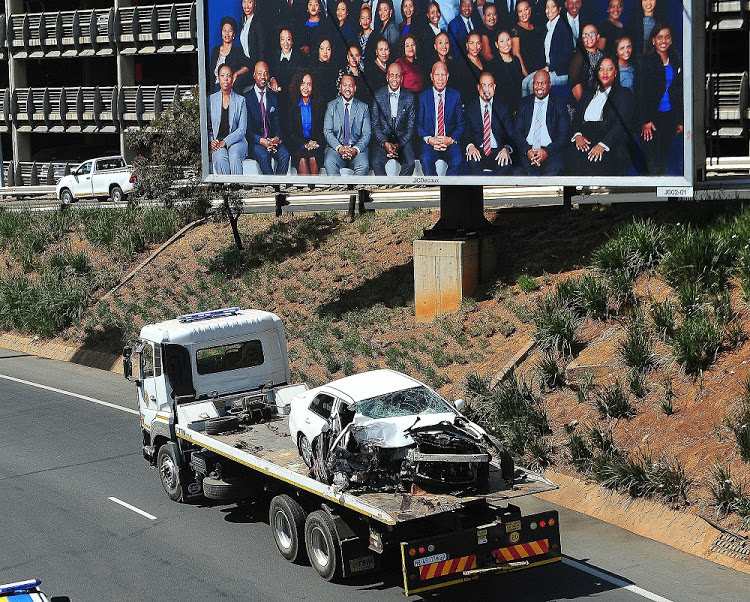 The car driven by Bosasa CEO Gavin Watson is transported from its accident scene on Monday.
Image: Veli Nhlapo / Sowetan

The police investigation into the death of Bosasa boss Gavin Watson is centred on the whereabouts of his cellphone and the speedometer of his wrecked company car.

A police source, who is stationed at the airport and who was on the scene, said the force of the collision showed the vehicle was travelling at high speed.

"The speedometer was stopped at the 140km/h mark. It is clear that he was driving at speed. Whether this was the cause of the crash is not yet known. That will only come out from an analysis of the vehicle and potentially from postmortem results," a police source told TimesLIVE.

Police spokesperson Col Katlego Mogale would say only that the investigation was ongoing.

“The police cannot report on the case minute to minute. Once the case is finalised we will be able to comment further.”

Gavin Watson was speeding at the time of fatal crash, eyewitness says

The car Gavin Watson was driving was traveling at high speeds when it ploughed into a pillar on Monday morning, an eyewitness has said.
News
2 years ago

Watson, 71, died when the Toyota Corolla he was driving, which belonged to African Global Operations [formerly Bosasa], crashed into a bridge pillar within the precinct of OR Tambo international airport around 5am on Monday.

TimesLIVE understands from police sources that Watson's cellphone has yet to be found.

He said during a search of the scene Watson's phone could not be located.

Bosasa spokesperson Papa Leshabane, asked on whether police had approached company staff for assistance in locating Watson's cellphone, said: "I am not having this conversation with you.

"I am not commenting on it or on what has been asked."

A second police source, with knowledge of the investigation, said fingerprints were being taken from the body.

"This is being done for several reasons. it's part of standard operating procedures. And it's being done to stamp out all the speculation on whether this was in fact Watson who died."

Gavin Watson's body to be 'fingerprinted to stamp out all speculation'

Fingerprints were being taken from the body of Bosasa boss Gavin Watson to make sure it was him who died in a car crash in Johannesburg on Monday ...
News
2 years ago

When Gavin Watson went to bed on Sunday night, he had no idea he would have to spend a part of his Monday morning telling people he wasn’t dead.
News
2 years ago