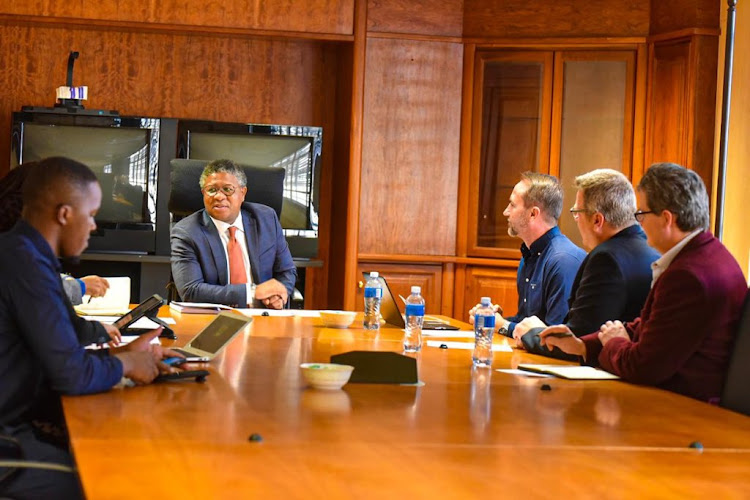 Transport minister Fikile Mbalula on Wednesday held meetings with representatives of Outa and the AA over various issues, including e-tolls.
Image: @mbalulafikile via Twitter

Outa on Wednesday welcomed a discussion with recently appointed transport minister Fikile Mbalula, saying it was “encouraging” to have someone willing to address their concerns.

In a video posted on Mbalula's Twitter account on Wednesday evening, Outa CEO Wayne Duvenage said Mbalula's approach was refreshing compared with that of his predecessors.

“There have been seven [transport] ministers since the e-tolls [began] ... This is the first time we're engaging with a minister who is keen to get our input and digest it. So we're quite buoyed by that.

“We believe that had this similar approach been taken several years ago, we would have found a solution,” he said.

WATCH: Press Briefing on my meetings with AA and OUTA. #FixingTransport https://t.co/vmnJl6zifS

Duvenage was speaking after a meeting between Outa, the Automobile Association (AA) and Mbalula, over what the minister described as “transport issues of common interest”.

Mbalula said he was willing to meet “stakeholders who were prepared to make an honest contribution towards an efficient road-based transport system”.

Beyond e-tolls, Mbalula said government was also determined to address congestion on the country's roads, ensuring that various means of transport were safe for all commuters and passengers, and making transport cheaper. On the latter point, he said he was referring to a network that meant even those with their own private vehicles could choose to use public transport.

Twarring comrades must 'sit down and talk': Cyril Ramaphosa

Former Tshwane mayor Solly Msimanga has threatened to "expose" the ANC's "lies" on the e-toll issue.
Politics
2 years ago