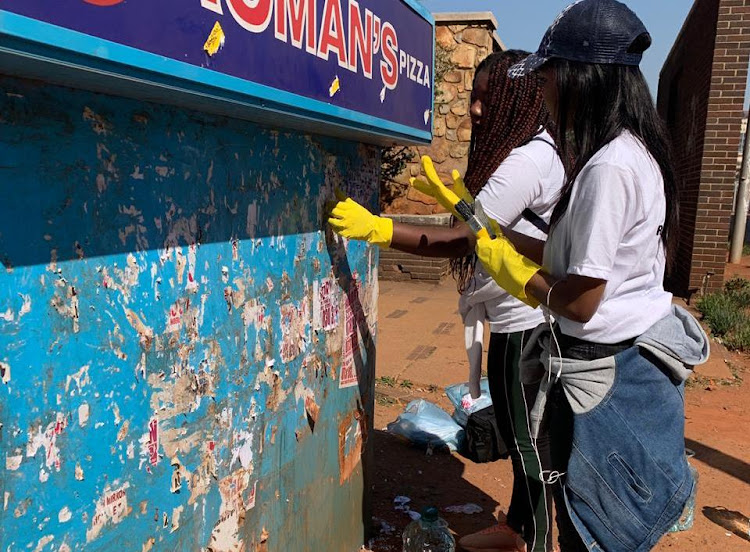 A clean-up campaign by a group advocating for legal abortions was hailed as a "success", with over 1,000 flyers torn down in the Johannesburg CBD on Thursday.

The group, calling itself Sexual Reproductive Health For Your Information (#SRHFYI), took to the streets to remove flyers promoting unsafe abortions.

One of the organisers, Kanyisa Booi, told TimesLIVE that they reach out to people and do not just take the flyers down.

"The clean-up went well. We managed to reach an audience, which is fantastic. However, we are disappointed that no one came through from the department of health. It is disheartening that they could not attend such an important event.

"We removed over 1,000 flyers at Park Station. Unfortunately, because of the bylaws, we could not post messages on safe abortions and where people could go to have the procedure done," Booi said.

She said they were planning for a similar event for September 28, which is designated as Safe Abortion Day.

"As Women's Month comes to a close, this is a reminder that no woman should have to die for making a choice that law and constitutional rights support. Abortion is healthcare and, therefore, a basic human right," said Booi ahead of the event.

"Science corroborates that abortions done by trained health care providers in a controlled environment are safe and do not compromise a woman's quality of life beyond the procedure," she added.

A group calling itself Sexual Reproductive Health For Your Information (#SRHFYI) vowed to take to the streets of Johannesburg on Thursday in an ...
News
2 years ago

A male nurse was arrested by members of the Hawks’ Serious Corruption Investigation Unit for corruption at an Mpumalanga clinic on Tuesday.
News
2 years ago

A male nurse has been suspended after an illegal at-home abortion went wrong.
News
2 years ago