Suspected dealers nabbed on KZN freeway with 300kg of dagga 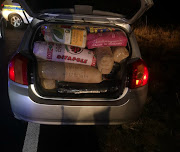 Image: SAPS Over 300kg of dagga was confiscated by the Hawks on the KwaZulu-Natal south coast.

Two men who allegedly stashed more than 300kg of dagga in their vehicles were stopped in their tracks by the Hawks while travelling between the Eastern Cape and KwaZulu-Natal.

Ntando Ndoyokwe, 32, and Thando Mbele, 31, were arrested on the N2 freeway near Scottburgh on Wednesday for allegedly dealing in dagga.

Mhlongo said both cars were spotted and intercepted.

The two men were released on R3,000 bail each after appearing in the Scottburgh magistrate's court on Thursday.

Mhlongo said the case was postponed to September 27.