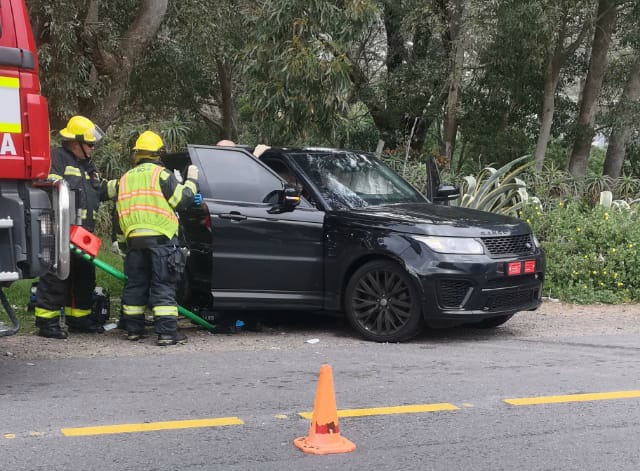 Police are investigating a possible car-bombing after a black SUV exploded in Tokai, Cape Town, on Friday afternoon.
Image: Supplied

A vehicle explosion on Steenberg Road in Tokai, Cape Town, has left the driver in a critical condition.

The black SUV was blown off the road and witnesses writing on Twitter suggest that a suspicious device was found beneath the vehicle. Police, however, have not been able to confirm the cause at this stage.

A preliminary police report states that the incident occurred at 12.30pm on Friday, and that the police's K9 unit and bomb squad were on the scene, which was handed over by the city's fire and rescue services.

"A vehicle exploded around 12.30pm," said police spokesperson FC van Wyk. "It is alleged that the victim left his house in Stonehurst Estate and while driving towards Ou Kaapse Weg on Steenberg Road, the vehicle exploded." 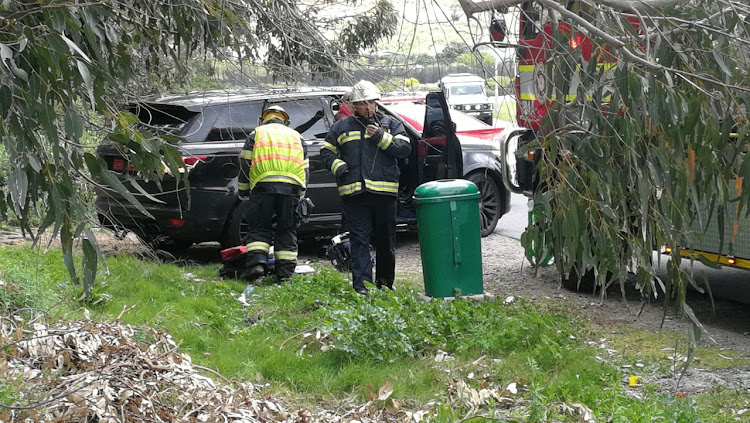 Greg Muller, who was called to the scene to help with the towing of the vehicle, said: “I saw blood pouring from under the car. I was looking for a second car because I saw debris all over the road. One guy saw the hole in the bottom of the car and that’s when we realised it could be a bomb."

He said the victim was able to speak.

"He was pale because he was losing blood. You don’t know if there’s another device," said Muller.

Van Wyk appealed to the public to provide any information they might have.

"At this stage this office cannot confirm what caused the explosion. Anyone with any information about this incident is requested to contact the investigating officer Capt Alexander on 082 469 2578 or Crime Stop on 08600 10111," he said.

The police investigation into the death of Bosasa boss Gavin Watson is centred on the whereabouts of his cellphone and the speedometer of his wrecked ...
News
2 years ago

Police on the hunt for three men who petrol bombed truck

Western Cape police are currently searching for clues at the scene where a truck was set alight with a petrol bomb in Lwandle, Cape Town, on Saturday ...
News
2 years ago

A 58-year-old man has been arrested for paying R10,000 to have his family bombed - using R1m worth of equipment.
News
2 years ago