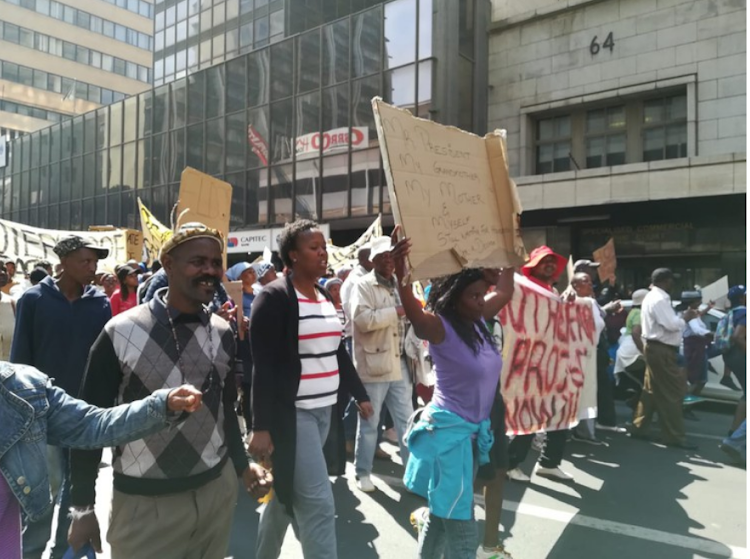 About 300 residents of Johannesburg South marched in the city centre on Friday. They are demanding that the provincial government address their needs for land and housing.
Image: Zoë Postman

About 300 residents living in Johannesburg South marched through the streets of the city centre on Friday morning. They are calling for the provincial government to address their needs for land and housing. They are also asking for their areas to be developed.

The march included residents from Eldorado Park, Diepkloof, Freedom Park, Meadowlands, Klipspruit, Ennerdale and Vryhof. They carried placards which read: “How long living in [shacks]”, “25 years of democracy and no development” and “We want Southern Farms Now”.

Some of the demands included, decent housing closer to economic activity, transparency in the Rapid Land Release Programme (RLRP) and Mega Housing Development programmes, an end to privatisation of the housing projects, employment of community members in development projects, transparency in the election of community liaison officers, and free quality healthcare and education in their communities.

Armed with a housing list of their own devising, Khethi Chiya and members of his Dudula group move around Orange Grove in Johannesburg evicting ...
News
2 years ago

Following protests for land and housing in Johannesburg South in May 2018, the provincial government adopted the RLRP. The programme assisted with identifying land for redistribution to people who want to build their own houses. As a result, some farms known as the Southern Farms were identified for redistribution.

But at the march resident Venessa Beukes said that very little has happened since the farms were identified. The land has been standing vacant since it was identified for the RLRP despite people’s desperate need for housing in the community. “The only thing left to do is for us to take that land by force,” she said.

Beukes said she applied for an RDP house in 2005 and again in 2017. She was told that she qualified for a house, but she is yet to be allocated one. She has eight children and nine grandchildren.

“If [provincial government] doesn’t want to build houses for us, then just give us the land so we can build our [shacks]. They must just give us toilets and water … They can come back and give us electricity but we just need roofs over heads now,” said Beukes.

Edith Raditlhalo of Orlando East suggested that dilapidated buildings that were standing vacant in the area could be used for housing. She said she joined the march because she desperately needed a place to stay with her children. “During apartheid, we were the ones on the ground fighting for democracy. Now, we don’t even have houses. These politicians are living a better life. Their kids are getting the best and we have nothing. Is that fair? They just don’t care about us,” she said.

When the marchers arrived at the respective state offices, they were told that both Makhura and Mamabolo could receive their memorandum. Residents have given the state seven days to respond to their demands.

The group are expected to meet at the Southern Farms at 10am on Saturday to discuss the way forward.

One arrested in KZN land grabs

One person has been arrested in KwaZulu-Natal following land grabs in Thornville, outside Pietermaritzburg.
News
2 years ago

Families refuse to budge without compensation for new road

“I will not allow my ailing parents to be moved from the home they built more than forty years ago before Thulamela municipality compensates them,” ...
News
2 years ago