The kidnappers of six-year-old schoolgirl Amy'Leigh de Jager outside a Vanderbijlpark primary school on Monday morning have made contact with her father.

Police Sergeant Gertrude Makhale confirmed that the kidnappers have contacted Wynard de Jager but could not be drawn to comment on reports of a ransom demand.

She said police were "still mobilising at this stage".

De Jager's cellphone number was circulated on a poster for her safe return, which was shared on social media.

Amy'Leigh was pulled out of her mother Angeline's arms, when she was being dropped off at the Kollegepark primary school at around 7.40am on Monday.

Counselling sessions are currently under way at the school.

The mood was sombre among parents who rushed to the school as soon as the news broke.

One of the mothers, who was too emotional to speak much, told TimesLIVE that Amy'Leigh was a sweet little girl.

"I don't understand why they would target such a young child," she said, before bursting into tears. 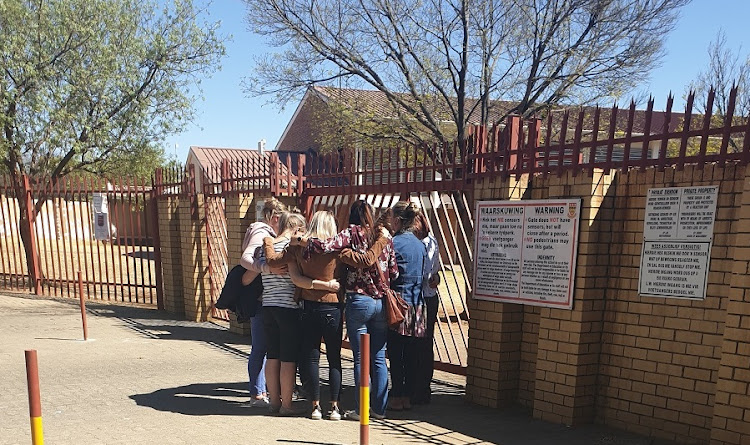 A group of mothers gathered at the school gate, praying for the safe return of the little girl.
Image: Belinda Pheto/TimesLIVE

The woman was among a small group of mothers who formed a circle on the school gate, praying for her safe return.

"I really hope that they will not harm her in anyway. She's an innocent child," said a woman who only introduced herself as Anne, and is also a parent at the school.

Member of the School Governing Body (SGB) Andries Pienaar told TimesLIVE that they were all shocked and disturbed by what happened.

"You can clearly see that this was a well-planned abduction because they snatched the child from the mother," he said.

Pienaar dismissed reports of a possible attempted hijacking and said this was a clear abduction.

He said local churches were currently providing counselling to the teachers and pupils.

Police have appealed to the public for information to help with the search for Amy'Leigh.

Makhubele said police had not been able to locate the child yet. They do not have the registration number of the vehicle driven by the kidnap suspects.

“We are calling on anyone with any information to contact the police,” Makhubele said.

The school has also issued an alert, calling on people to help.

Amy'Leigh's mother was driving a Polo.

Her aunt shared on Facebook, "Please pray for my sister and her husband, Jesus must help us get through this, my heart is in pieces."

At mid-morning, she said the search for the little girl's safe return was still under way.

A group of mothers have gathered at the school gates to pray for her while other parents have arrived to collect their children.

WATCH | Girl, 6, kidnapped out of mother's car at Vaal school

An alert has been issued for a girl aged six who was allegedly kidnapped out of her mother's car in Vanderbijlpark on Monday morning.
News
1 year ago

'Held prisoner for 10 years': Police rescue 19-year-old from her parents

A 19-year-old has been rescued from her parents, who allegedly held her captive for 10 years
News
1 year ago

A video, purportedly of SA photographer Shiraaz Mohamed pleading for his release, surfaced on Monday.
News
1 year ago