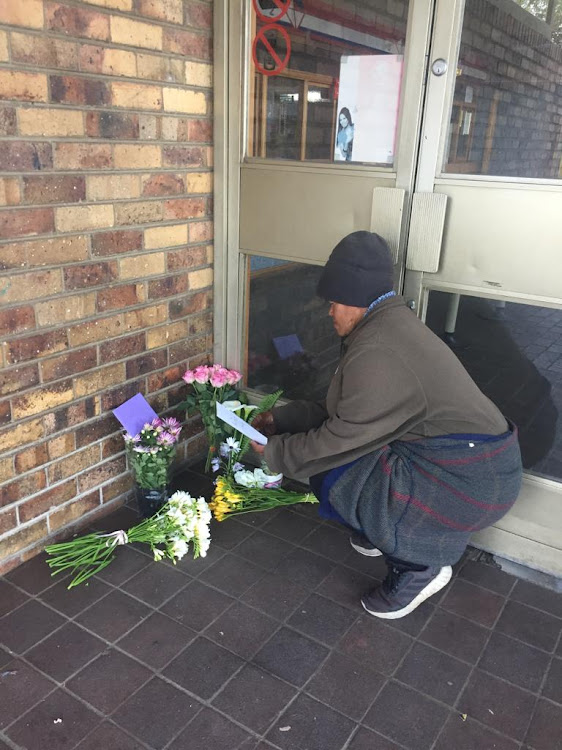 Following a man's court appearance, messages of shock and support have been pouring in for slain UCT student Uyinene Mrwetyana. A woman reads a card left with a bunch of flowers outside Clareinch Post Office today.
Image: Tanya Farber

The University of Cape Town will provide counselling for all those affected by the death of of 19-year-old student Uyinene Mrwetyana. This, it said, as it explores ways to commemorate her life.

Mrwetyana's death was confirmed during court proceedings at the Wynberg magistrate's court, where a 42-year-old post office employee allegedly confessed to the crime. He was charged with murder, rape and defeating the ends of justice.

The court heard that Mrwetyana had tried to collect a parcel but was told to come back later as the power was off. The man, who cannot be named yet, reportedly locked up and assaulted the teenager moments before he bludgeoned her with a scale.

UCT vice-chancellor Proffessor Mamokgethi Phakeng said the student had died in a horrifying manner, which left the university community shocked to its core.

"It is incomprehensible that a young life, with so much potential, has been stolen from her family and our community. It is even more distressing that this horrible incident is one of many where women - young, and old, and even girls - are ripped from our community in such a violent manner," said Phakeng.

Phakeng expressed condolences to the Mrwetyana family who had to endure unimaginable suffering, pain and anxiety.

"Losing a child is one of the most painful experiences for a family, but to lose her in this manner is even more tragic and heartbreaking. We met with the family last week and have been in constant communication with them. We will keep them in our thoughts and will do whatever we can to support them," she said.

In an attempt to seek justice for the slain Mrewtyana, and safety for students, a group of UCT students have vowed to embark on a protest, which reportedly includes boycotting academic activities on Wednesday.

Protesters were expected to dress in black and gather at the campus's Sara B Plaza, according posters and information circulated on social media.

Phakeng said Mrwetyana's peers from her student residence, Roscommon House, her class, her faculty, and in the wider UCT community had been profoundly affected by her death.

Counselling assistance was available to staff and students who felt overwhelmed by the tragedy.

The UCT executive was expected to meet urgently to discuss how best to commemorate Mrewtyana's life and those affected by the scourge of violence.

"We urge you to please reach out to each other and support one another in this time of immense sadness and mourning. We are preparing a memorial space on campus and will share further details shortly," said Phakeng.

Outside Roscommon House, where slain 19-year-old UCT student Uyinene Mrwetyana lived in Cape Town, her friends were talking in low voices, their ...
News
2 years ago

'It's going to be a long night,' says grandfather of kidnapped Amy'Leigh

The family of kidnapped Amy'Leigh de Jager has vowed to stay at the Vanderbijlpark police station until the 6-year-old is found.
News
2 years ago