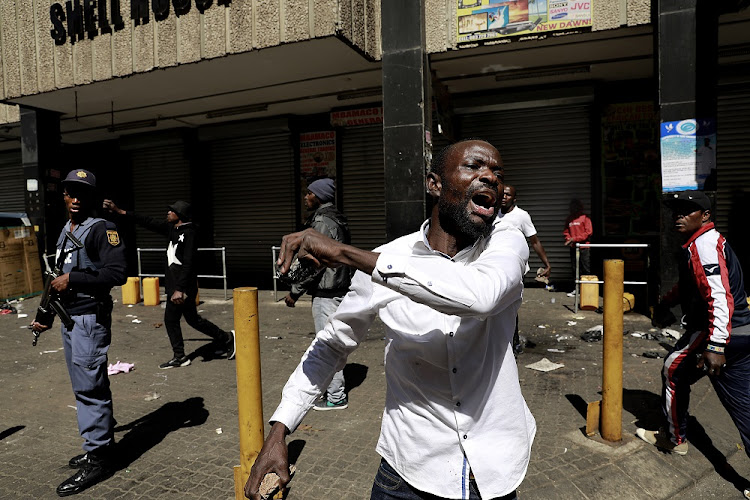 A foreign national reacts in the Johannesburg CBD after a foreign-owned shop was looted.
Image: Alon Skuy

Five people have been killed and 189 arrested in a spate of violence that has rocked parts of Johannesburg since Sunday, police confirmed on Tuesday.

The latest killings were of two South Africans who were shot in Coronationville on Tuesday afternoon.

"Police have increased deployments to cover all the areas identified as hot spots of violence that has seen several shops being looted, burned and property being looted," said police spokesperson Col Lungelo Dlamini.

He said the situation had been stabilised in parts of the Tshwane, Ekurhuleni, Johannesburg Central, Jeppestown and Cleveland policing areas.

This was, however, not the case in Coronationville, as violent clashes continued and claimed the lives of two South Africans on Tuesday. The clashes forced Gauteng premier David Makhura to leave a meeting between police minister Bheki Cele and those affected by the recent violence and rush to the area to call for calm.

Apart from these two murders, two killings were reported in Hillbrow and one near the Jeppe hostel.

Police had, however, made arrests in connection with the outbreaks of violence.

"A total of 189 arrests have been effected since Sunday," said Dlamini.

Those arrests are facing a raft of charges, ranging of charges which include public violence, malicious damage to property, theft, and business break-ins.

Police said they were forced to fire rubber bullets to disperse a group of people who planned to loot businesses in Thokoza and Kempton Park in the early hours of Tuesday.

Dlamini said the spate of violent incidents led to criminals gangs taking advantage of the chaotic situation and breaking into businesses, not only those belonging to foreign nationals but also other businesses.

A process to identify leaders of the protests was under way.

"In the meantime, police are identifying the leaders of these violent groups and will be arrested them once full evidence against them has been gathered," said Dlamini.

Gauteng police commissioner Lt-Gen Elias Mawela thanked members of the public who provided information to assist the police in dealing with the violent situations.

Mawela has also assured the public that no unlawful activities will be tolerated.

“All our members are on the ground to deal with criminality," he said.

The ongoing looting of shops in Johannesburg which began on Sunday has now affected the business of government.
Politics
2 years ago