'We are hurting, we are dying': UCT declares day of mourning for murdered student 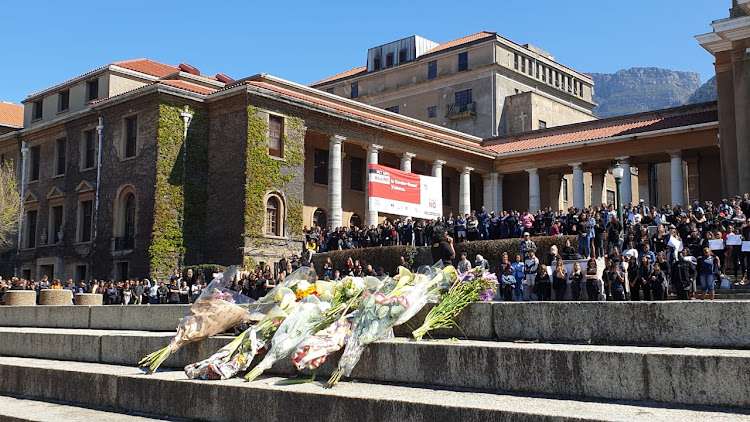 Students at UCT gather to pay respects and speak out against gender-based violence on Tuesday September 3.
Image: Dan Meyer

"We are hurting, we are dying."

These words captured the sombre mood on campus at UCT on Tuesday as students - traumatised by the murder and rape of Uyinene Mrwetyana - gathered below Jameson Hall to speak about the 19-year-old film and media student.

Since Monday, the focus of a large body of students has temporarily shifted from studies to activism and calling out gender-based violence in SA.

"We are hurting, we are dying," said a student who took to the microphone.

Mrwetyana was raped and bludgeoned with a scale inside the Clareinch post office on August 24 after being lured there by an employee. She had simply wanted to collect a parcel.

"The students, they don't know how to feel. It's difficult to go about your day as usual," said 18-year-old Siyamthanda Kibi.

According to reports, protesting students disrupted classes on Tuesday afternoon, marching into a lecture hall and singing.

Anger and outrage followed the discovery of the body of missing 19-year-old UCT student Uyinene Mrwetyana on September 02, 2019. She had been missing since August 24. A 42-year-old man who worked at the Clareinch Post office allegedly confessed to the rape and murder. Gender-based violence has been a national issue in South Africa for years, with 3 915 women and children being murdered in 2018.

UCT has confirmed that it will hold a "day of mourning" on Wednesday, following crisis talks after it was revealed in court that Mwretyana had been murdered.

Academic classes have been suspended and the university has committed to a programme of events to honour the dead student's life on Wednesday. Several night vigils have been held at universities around the country.

"We are declaring tomorrow, Wednesday September 4 2019, a day of mourning and UCT activism against sexual and gender-based violence," vice-chancellor Prof Mamokgethi Phakeng said. "There is no doubt that this tragic event has devastated us as a community and has left us bereaved and angry. Many staff and students have expressed their sadness and have gathered in separate vigils, prayer circles and small groups across campus.

"It is important that as a community we recognise this moment for what it is. A devastating incident of gender-based violence which is utterly unacceptable, shocking, criminal and should never, ever occur in our community or in our society.

UCT has pledged its support for a march to parliament on Wednesday, where protesters dressed in black will call on the government to declare the current spate of violence against women a national crisis.

At time of writing, a petition to have this order carried out had gathered more than 280,000 signatures.

"We as the UCT executive have been inundated with messages of sadness, grief, anger and anxiety. We have also seen how members of our community are supporting each other, reaching out for help and holding each other during this painful moment," said Phakeng.

"Please use tomorrow to mourn the loss of Nene, to signal our bereavement and grief, to rise against sexual and gender-based violence in our community and in our society."

University of Cape Town student Uyinene Mrwetyana trusted a “helpful” post office worker, before he allegedly raped and killed her.
News
2 years ago

Cape Town City will be playing to honour the memory of the murdered University of Cape Town student Uyinene Mrwetyana when they welcome Golden Arrows ...
Sport
2 years ago

The man accused of brutally murdering and raping University of Cape Town student Uyinene Mrwetyana had previously been convicted of armed robbery, ...
News
2 years ago