Image: Supplied Amy'Leigh de Jager, who was found unharmed some 19 hours after being abducted outside her Vanderbijlpark school.

Police have made three arrests in the case involving the kidnapping of Amy'Leigh de Jager outside the Kollegepark primary school in the Vaal on Monday morning.

Two women, aged 27 and 40, and a 50-year-old man were apprehended at their homes in Vanderbijlpark on Wednesday night, confirmed police Brigadier Vishnu Naidoo.

One of the female suspects, he disclosed, "is known to the parents of Amy-Leigh".

A separate source, a family member, confirmed to TimesLIVE that one of the people who had been arrested is "a very close family friend", while, the source added, "The other one [suspect] is also connected to the family."

According to the source, "Amy'Leigh is still very traumatised, so she hasn't gone back to school yet."

Meanwhile, Kollegepark primary school on Thursday shared to Facebook that its management was "aware of the suspects that were arrested in the Amy'Leigh case". But it added: "We cannot make all information known at this stage".

A Facebook page created during the 19-hour search for Amy-Leigh also confirmed that police had made arrests.

"All suspects in connection with the kidnapping of Amy'Leigh de Jager were arrested during the night. We need special prayers for the family for the trial phase and recovery after the tragic trauma. . .Thank you to the public for all the love, prayers and support in this tragic time."

Four men had grabbed the grade R pupil from her mother, Angeline, outside the school shortly before 8am. They bundled her into a white Toyota Fortuner before speeding off.

The six-year-old Amy-Leigh was found on Tuesday morning at around 2am. She was dropped off by two people on a street close to the Shakespeare Inn in Vanderbijlpark, and told her mother was waiting for her at the shop across the road. The child screamed when she did not see her mother. Two people on their way home from a pub stopped to ease her distress, and they walked her to a police station.

He praised "the unwavering commitment shown by the investigators and members of Crime Intelligence in this case.”

"These members have worked around the clock ever since Amy'Leigh's kidnapping was reported to us and such dedication is very encouraging,” said General Sitole.

The three suspects are currently in police custody.

They are expected to appear in the Vanderbijlpark court by close of business tomorrow.

The SAPS said: "We are satisfied that we have the three main people responsible for the kidnapping of Amy-Leigh behind bars but the possibility of more arrests being effected cannot be ruled out."

For clarity Amy'Leigh's name was incorrectly spelled Amy-Lee and Amy-Leigh when the first missing person alert was issued by her school on Monday. Her parents have since confirmed the correct spelling of the little girl's name is, in fact, Amy'Leigh. 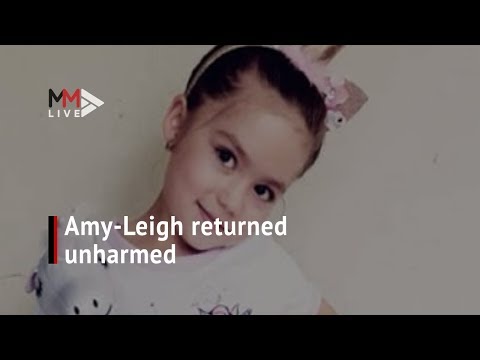