Tributes pour in for hanging victims Ayakha and her three siblings 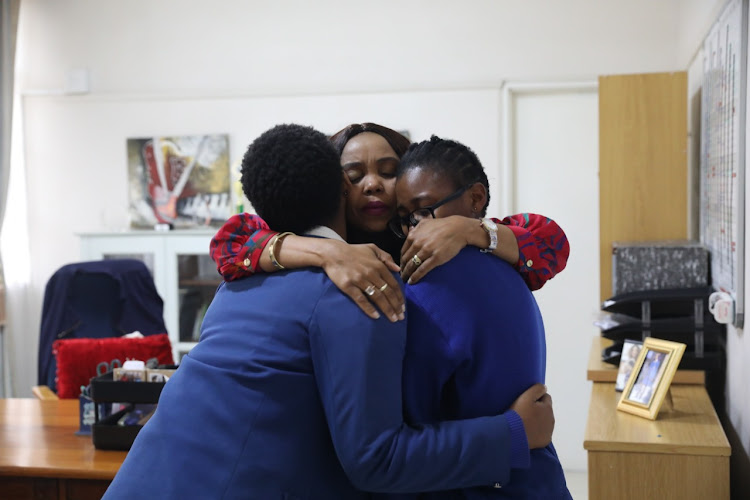 Pinetown Girls' High school principal Sibongile Njapha comforts two pupils at the school on Wednesday. The girls were friends of Ayakha Jiyane, a grade 11 pupil, who was hanged, allegedly by her stepfather.
Image: Sandile Ndlovu

The murder of four KwaZulu-Natal siblings is the latest crime to shock the nation, and tributes for the three young children and a teenager are flooding social media.

Ayakha Jiyane, a grade 11 pupil at Pinetown Girls' High School, was allegedly hanged by her stepfather. Her lifeless body was discovered by police in a bushy area in New Germany.

Her three younger siblings, Khwezi, Siphosethu and Kuhlekonke Mpungose were discovered by their mother on Tuesday afternoon, hanged inside their home.

On Tuesday afternoon, just before she was killed, Ayakha told her friends: “If anything happens, just know I was kidnapped ... Something has happened to me.”

The government is being called out on social media for not doing enough to ensure the safety of vulnerable members of society. Other social media users sent messages of support to the children's mother, Xolile Mpungose.

A father hangs and kills his four children and our government still says no death penalty? Ok. 💔 #RIPAyakhaJiyane and siblings ✨🕊 pic.twitter.com/x1t2eoNL2X

4 children, 4 children?? What was going on in this man's mind after the 1st child. Everything seemed normal?? And he continued to the 2nd 1? I'm weak, men are cancelled#RIPAyakhaandSiblings

#RIPAyakhaandSiblings my deepest condolences to the mother and the family.... What's happening in South Africa these days is really sad😭😭😭 pic.twitter.com/VL2vgPlNak

No parent should have to bury their child.
How is she supposed to recover from this?
She did not lose apart of her world but all of it.
She has to face 4 coffins in one moment 4#RIPAyakhaJiyane #RIPAyakhaandSiblings
#PrayForXolile pic.twitter.com/W7ZQLzNbd1

😭😭💔
these are her already dead siblings allegedly killed by a step father today, He then went and Kidnapped her from her school and Killed her too

The most beautiful yet disturbing pic...disturbing because of how the kids perished at the hands of a man who was supposed to protect them oh Morena re sentše eng le bana ba rena mara...#RIPAyakhaJiyane #RIPAyakhaandSiblings pic.twitter.com/jc89wg47WB

"If anything happens just know I was kidnapped or something has happened to me." These were the last words Ayakha Jiyane uttered to her friends ...
News
1 year ago

A KwaZulu-Natal man accused of hanging his three biological children and his stepdaughter has been arrested by police.
News
1 year ago