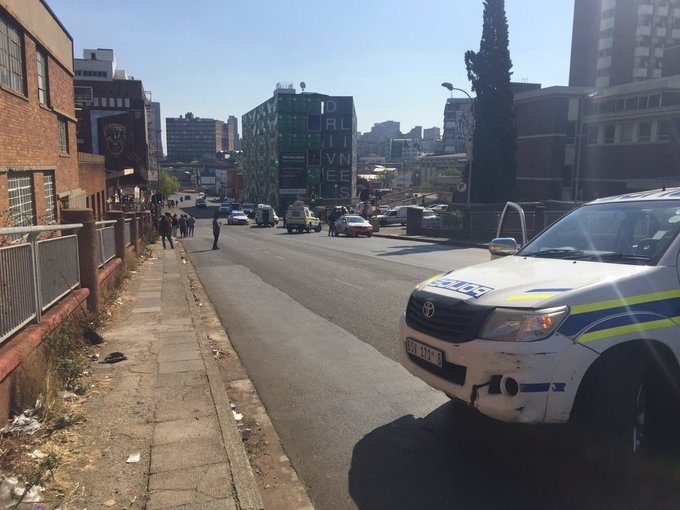 Albertina Sisulu Street next to Maboneng was closed due to the crowd that gathered at Murray Park earlier. Police are on the scene.
Image: Emram via Facebook

Brig Mathapelo Peters said a crowd of about 1,200 hostel residents had gathered at Murray Park and shortly into the address by Buthelezi, a splinter group disrupted the address and left before he had finished speaking.

Gauteng has suffered widespread violence and destruction in the past week, leaving 11 dead, with seven directly linked to the protests. The violent protests started on August 28 2019 in Pretoria, before spreading across the country. Families of the deceased have been left distraught and the nation faces pressure from other African countries due to the ongoing xenophobic violence.

"Incidents of attacks on businesses have since been reported in parts of the CBD," said Peters. "Police fired stun grenades and rubber bullets to restrain the growing crowd who attempted to move through the CBD via the corner of Bree and Twist streets."

Police remain in the area "to ensure minimum damages and criminality ... and on high alert to ensure the safety of church-goers, shoppers and commuters who were caught up in the mayhem".

The public was warned to stay away from the Jeppestown area, MTN taxi rank and shops in the CBD until calm has been restored. Said Peters: "This is to ensure that innocent people do not find themselves either injured or arrested unnecessarily."

At this stage, no injuries and no arrests have been reported.

Residents and shoppers in downtown Johannesburg took to social media, stating that their cars and apartment windows had been damaged by some of the marchers.

Maboneng's Social Club announced the postponement of its evening event for safety reasons.

The POPArt Theatre also announced, "We are very sad and sorry to postpone tonight’s planned In Confession with Tats Nkonzo, What Is Next, due to marches that have come through Maboneng today."

This is getting out of control Joburg Cbd pic.twitter.com/WQyvrKqVxp

The situation is tense at #JohannesburgCBD. All shops by foreign nationals got close.

It started when I heard a gunshot near the rank and everyone fled, all shops got closed same time.

If you are in the CBD, please be safe.#XenophobiaInSouthAfrica pic.twitter.com/XvJCsfGmjb

These people are currently going past my flat. Throwing huge rocks and breaking windows and randomly beating up people.
Apparently they are trying to remove Nigerian drug dealers from the streets 😷 pic.twitter.com/V5VRhoaw3u

Maboneng to Bree street. 😭😭😭Guys its really bad please be safe if you around Johannesburg CBD💔💔#JohannesburgCBD#Xenophobia#jhbcbd #eNCA pic.twitter.com/3ulfqRKnNc

IFP president emeritus Mangosuthu Buthelezi on Sunday battled to quell tensions in Johannesburg as he spoke out against xenophobic violence.
News
2 years ago