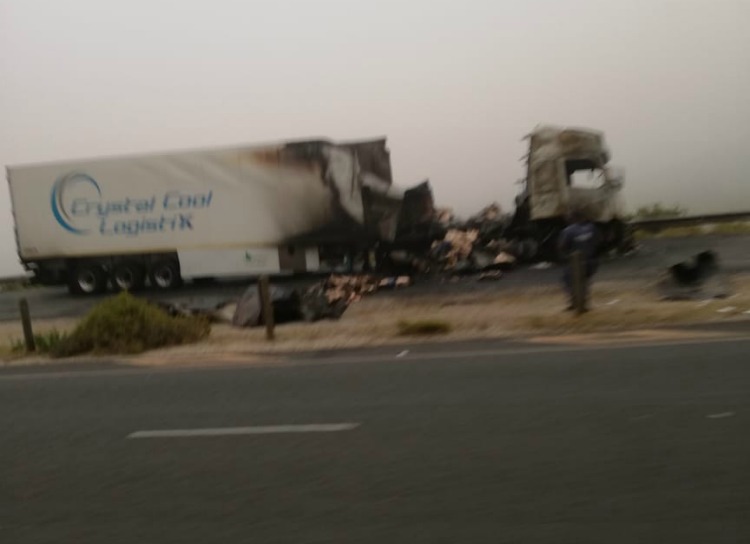 A truck transporting chickens on the N7 near Piekenierskloof was one of four that was targeted on Monday night in the Western Cape.
Image: Twitter/@BertieNel

Trucks were petrol bombed and set alight in four separate incidents overnight in the Western Cape, with one driver left "seriously injured".

A truck was petrol bombed on the N7 near Porterville, where the driver had pulled over to rest. He was taken to Piketberg hospital with severe burns.

A cement truck was petrol bombed on the N7 near Moorreesburg, after two white Mercedes vehicles forced it off the road, before setting it alight. The driver escaped.

A third truck, loaded with chickens, was forced off the road by two sedans and set alight, while the driver was threatened with a firearm, on the N7 near Piekenierskloof pass. The driver escaped unharmed.

Another truck was stoned and set alight on the N2 near Strand. Again, the driver managed to flee unharmed.

All the incidents occurred between 10pm and 2am, and are being investigated by the police.

Provincial traffic spokesperson Kenny Africa said the department was holding urgent talks with traffic services and the transport department to find a solution. Transport minister Fikile Mbalula was expected to make an announcement on the ongoing attacks.

“This can't keep happening. It's very bad at the moment,” said Africa.

Police said no arrests had been made and the motive for the attacks was not known.

A truck was petrol bombed by three men on the N1 in Cape Town on Wednesday morning, metro police said, while in Midrand, a truck was looted after an ...
News
2 years ago

WATCH | Motorists scramble to loot truck with eggs in Midrand

Motorists on Wednesday looted a truck transporting eggs after it crashed at the Allandale offramp in Midrand.
News
2 years ago

South African-owned businesses and an embassy are being targeted by protesters in neighbouring countries after a spate of xenophobic attacks on ...
News
2 years ago