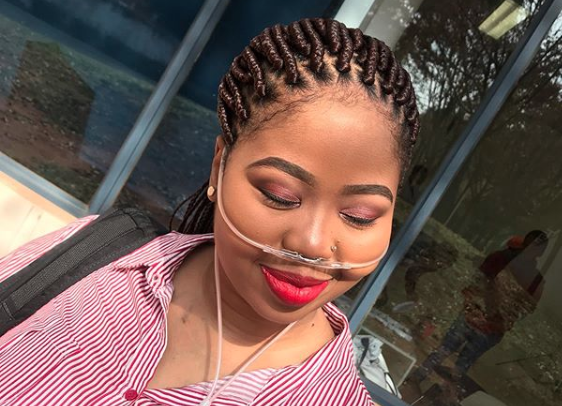 Rare diseases South Africa has confirmed to TimesLIVE the death of Gontlafetse "Miss Oxygen" Sehako, an internet sensation who touched the lives of thousands of South Africans through her Twitter and Instagram platforms.

According to the organisation, '"Miss Oxygen", as she was widely known among her followers, was suffering from pulmonary fibrosis and hypertension. This rare disease affects the lungs and breathing, which means patients are dependent on an oxygen tank which they carry around with them.

Her last two messages on Twitter were posted in July while in hospital. “Hospitals are too cold,” and “I'm scared”.

Miss Oxygen died on Wednesday. A Twitter account attributed to her sister Puseletso announced the sad news on Thursday morning.

I'm shattered 💔.
Thank you all for your contributions, support & prayers .God called my sis home.🕊❤. Heaven couldn't wait for you , Goodnight my love. I'll see you in the morning🌛. I love you always. #ICarryHopeInMyLungs#RipMissOxygen https://t.co/l6YhlMxwSb

Your positivity inspired many! 🙏🏿 https://t.co/loyQWi5bi2

One of us has fallen 💔😔😭Our own sister #Icarryhopeinmylungs we have lost four souls to lung related diseases 😔this year in our circle of hope, makes me wonder if I'm Next 🤔😭 #RIPMissOxygen till we meet again again.🙏 pic.twitter.com/fwTvOsRvRs

Wooow this hits different 😭😭I remember when I first saw her pictures and her story I just loved her and left her a message on IG Dm 💔 .Her story reminded me of "Faults in Our Stars " 😭😭

#ICarryHopeInMyLungs 💔💔💔💔 Rest easy angel
Didn’t know you personally but been following you ever since I got to know of you. Your positivity gave me life 🌹 #MissOxygen 🌸 #RIPMissOxygen 🌸 pic.twitter.com/ZrTkxKX5j1

In March, Prince Kaybee reached out to her after she shared via Twitter that her oxygen tank was broken, and would cost her R11,000 to fix, money she said she did not have. “So I've been sulking because my portable machine broke, I'm thinking how will I get 11k to fix it? My lung is struggling since it doesn't get enough oxygen.”

I want to buy you a new one, where are you? @Tshepo__Khomari find her please! https://t.co/9iqTYRqWec

Africa has passed a milestone threshold – three years with no case of wild poliovirus detected.
News
2 years ago

Not disabled enough for grants body

Wilhemina Senne has her hands full caring for her 20-year-old disabled daughter Metsiatsele.
News
3 years ago