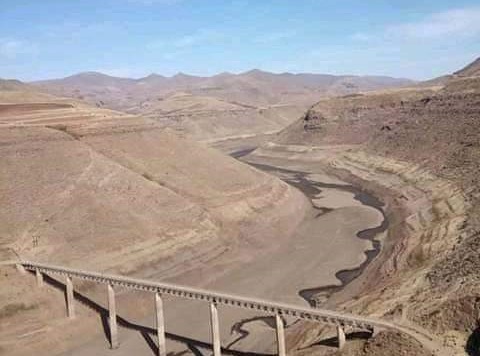 The Katse Dam in Lesotho has been hard hit by ongoing drought. This image was taken on September 11 2019, according to the photographer.
Image: Jonathan Molapo via Twitter

With Lesotho's Katse Dam at an alarmingly low level, Gauteng residents are being urged to conserve water. However, SA's water and sanitation department says there is no need to panic.

In a statement this week, the department noted the dam's level had dropped from 18% last week to 16.9%, adding that it was heading for “serious times”.

Speaking to TimesLIVE on Friday, department spokesperson Sputnik Ratau said the low level was a result of ongoing drought.

“We are hoping that we will get the summer rain, as we did not get much rain in the last rainy season in 2018. The rain only came later, around December.”

Asked if the situation would affect Gauteng, Ratau said: “We have our catchments that feed into the Vaal River System.”

It’s so scary and abnormal. This is the intake tower 😢😢😢 pic.twitter.com/M4o1HruLGl

“So far there will not be any impact, because we have sufficient water in storage to cater for the amount of water needed.”

The department cautioned, though, that dam levels were also declining in the Integrated Vaal River System (IVRS).

The IVRS is critical for water supply in major economic sectors in the country, including Eskom-operated power stations in Gauteng, the Sasol petrochemical plants on the Mpumalanga highveld and the North West.

A crucial aspect is the level of the Vaal Dam, which is now at 58%, compared with 91.9% at the same time last year.

“The department reiterates the seriousness attached to falling dam levels and the resultant impact on everyone concerned. If individual water users could do their part in saving water, an even greater impact could be made on keeping the dams stable and taps running,” said Ratau.

For the first time, Lesotho might be forced to suspend water transfer to Gauteng, SA as Katse dam is running dry. Water level is below 18% now. This also raises the prospect that ‘Muela will stop generation of electricity and Lesotho will depend entirely on imported electricity.

Deputy President David Mabuza has cautioned that if government does not move with speed to arrest the Sedibeng regional sewer scheme disaster, people ...
Politics
2 years ago