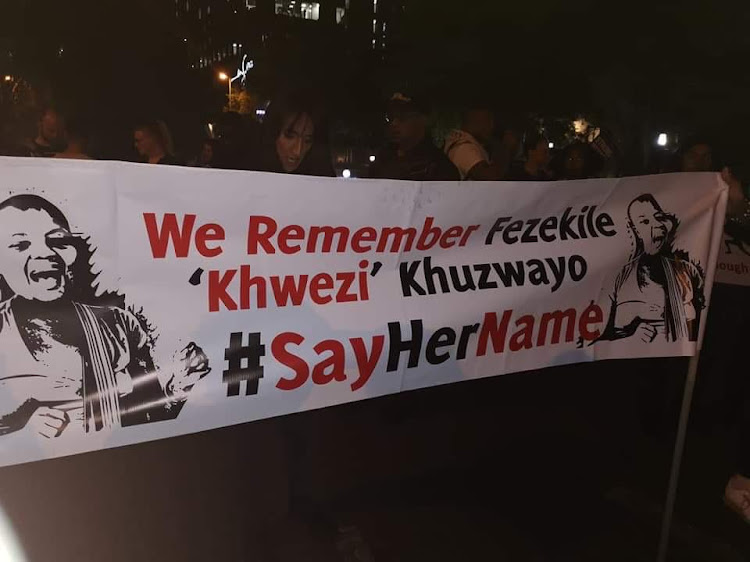 The #SandtonShutdown organisers have demanded 2% from companies listed on the JSE.

“We are hoping to achieve some kind of commitment from the private sector through the JSE. We are demanding 2% from all companies listed on the JSE, which will be used to fight gender-based violence,” one of the organisers of the march, Fatima Moutloatse, said on Friday.

Moutloatse said they had also submitted demands for a two-day gender-based violence and femicide summit.

Hundreds of women gathered outside the JSE in Sandton as early as 3am on Friday.

Dlamini, who seemed angered by reports that she had been chased away earlier, said the league attended the march to participate in a call for action.

Women and men clad in black sang songs and paced through the streets, some chanting “Khwezi! Khwezi!", the name used for Fezekile Ntsukela Kuzwayo who, in 2005, accused former President Jacob Zuma of rape.

Asked about the demand for 2% from companies listed on the JSE to help fight gender-based violence, Dlamini said: “We agree with the demand of 2%. Also the unequal pay for equal work, we agree with the issues of unpaid labour and the economic conditions that have to change. More budget must be put in the women’s programmes.”

Clad in ANCWL regalia, she called on government to use “comprehensive programmes that are going to be protective and preventative, and not reactive”.

“If we always react, more young women and children are going to be killed,” she said.

“We must change our approach. Parliament has to fast-track some of the demands, like no bail and life sentences without parole for perpetrators. All perpetrators must known to the public.”

The organisers have called on several businesses to shut down and allow their staff to join the march.

Comedian Tumi Morake has also pledged her support for the initiative.
TshisaLIVE
2 years ago

About 300 protesters sang and held placards that read: “Women born to die?”

Others read: “Respect our existence or expect our resistance.”

Activist and survivor of gender-based violence Rosie Motene said the first step out of an abusive relationship is “an honest conversation in a secure space”. However, very few women feel they can talk about their experiences of violence.

“Women and men all need to address this issue openly and to be prepared to listen in ways that can make a positive difference.”

“If we can use this climate to really get through the message that silence is an enemy, and provide the means for women to safely speak, we should be able to make some long-overdue, real progress.”

To paraphrase what’s being said: Women are dying and our government says there is no money to combat gender-based violence. We’re here to ask the JSE for that money. #SandtonShutdown #IWILLNOTBENEXT #paythepatriarchytax pic.twitter.com/GGps8kaBXf

Companies around Sandton should allow staff to go demonstrate at the #SandtonShutdown. pic.twitter.com/t3NQQ6LjM2

#SandtonShutdown
In Sandton Maude Str closed off btwn West & Rivonia, Gwen Ln btwn Fredman & Maude. Crowds have started to gather, more are expected as the day continues. Motorists are advised to avoid. There's a high police visibility in the JSE precinct. #SaferJoburg pic.twitter.com/9G3ck2VtP2

Domestic violence ties with gangsterism for the second-leading cause of murder, with personal arguments being the primary reason.
News
2 years ago