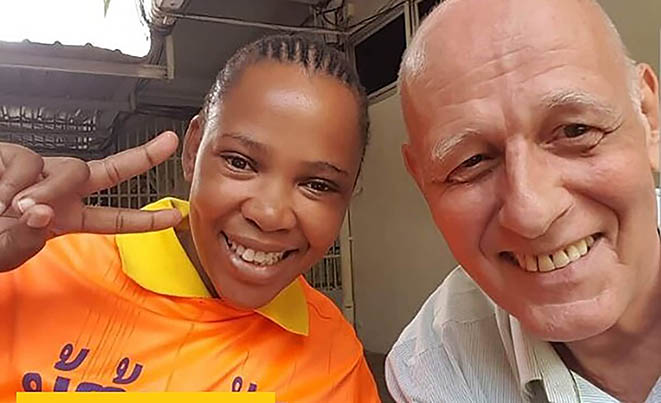 Freed drug runner Thando Pendu and Henk Vanstaen, who helped her while she was jailed, take in the fresh air at the International Detention Centre in Bangkok last week. Pendu was released from a Thai prison after being pardoned by the king.
Image: SUPPLIED

As Makhanda's Nolubabalo “Babsie” Nobanda returns to SA on Thursday, Henk Vanstaen, the Thai resident who has supported her throughout her incarceration in the kingdom, believes she has learnt a lot.

Nobanda is the fifth South African Vanstaen has assisted in returning to the country, and he has campaigned tirelessly for the government to consider prisoner transfer agreements.

Speaking to DispatchLIVE from Thailand on Thursday, Vanstaen said: “She has definitely learnt from this experience. She has come out a better person, not only in terms of getting a degree and education, but in terms of her mental strength.”

Nobanda cried as she hugged family and friends shortly after her arrival on Thursday afternoon.

In 2011, Nobanda, now 31, was caught at the Bangkok airport with 650g of cocaine mixed with baking powder woven into her dreadlocks.

She was sentenced to 30 years in prison, which was later commuted to a 15-year sentence. Her release from Bangkok's Klong Prem prison earlier this month came as a result of a prisoner amnesty granted by the Thai king.

A huge amount of gratitude has been expressed to Vanstaen for his efforts, but he insists “no-one owes me anything”.

“I honestly don't want any recognition. I just feel if I can help people then I'm maybe making the world a better place.”

Tears flowed at the OR Tambo International Airport on Thursday as Nolubabalo “Babsie” Nobanda returned home after a eight-year stint in a Thai jail.
News
2 years ago

She's coming home - 'Babsie' to be freed from Thai jail

Convicted drug mule Nolubabalo "Babsie" Nobanda, who is serving time behind bars for smuggling cocaine in her dreadlocks, has had her sentence ...
News
2 years ago