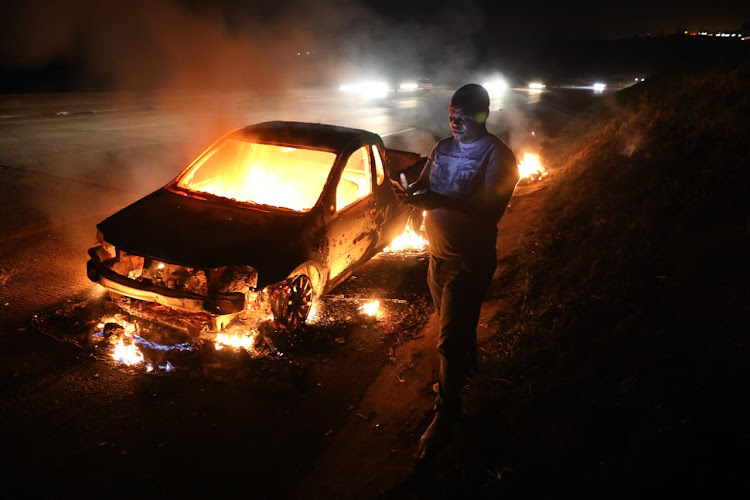 Stanley Nzuza, the cousin of late deputy minister Bavelile Hlongwa, stands next to his car, which caught alight on the N3 on Friday night. Hlongwa died in a car crash last weekend.
Image: Sandile Ndlovu

Stanley Nzuza, the cousin of the late deputy minister of mineral resources Bavelile Hlongwa, narrowly escaped death when his vehicle went up in flames on the N3 freeway on Friday evening.

TimesLIVE arrived on the scene near Cato Ridge, about halfway between Pietermaritzburg and Durban, shortly after Nzuza's vehicle had been engulfed in flames.

Nzuza said had been travelling to Hlongwa's home in Umbilo, Durban, where relatives and friends had gathered to pay their respects to the 38-year-old chemical engineer before her state funeral on Saturday.

“What have we done? Bavelile has just been killed in a car accident and now it's me,” he said.

Nzuza said he had refuelled his car at a petrol station on the N3. Shortly after departing, he noticed flames coming from the engine of his Opel Corsa bakkie.

“I went to go and see what was going on, and the engine was on fire. There was nothing more I could do,” he said.

Members of the fire department arrived shortly before TimesLIVE left the scene.

Hlongwa and four other people were run over and killed by a truck near Pretoria on the N1 from Polokwane last Friday. Her car had stopped to assist at another accident scene when the crash happened, the presidency said.

Deputy minister of mineral resources Bavelile Hlongwa and four other people were run over and killed by a truck on the N1 from Polokwane on Friday.
Politics
2 years ago

Before her death, deputy minister of mineral resources Bavelile Hlongwa requested a sit-down meeting with former president Jacob Zuma to pick his ...
News
2 years ago

Political leaders have expressed their shock and sadness at the death of deputy minister of mineral resources and energy Bavelile Hlongwa who died in ...
Politics
2 years ago