WARNING: This article contains a graphic image showing a wound to the victim's head Gibson Ncube was attacked on Saturday by an angry mob of people who have been trying to evict him from his home
Image: Melissa Ncube

An Alexandra man was attacked and hacked by a "mob" at his two-bedroom duplex, situated in a narrow street in the Johannesburg township, on Saturday.

Gibson Ncube sustained serious injuries to his neck when he came under attack from a group of about 30 people, allegedly over a long-standing issue regarding eviction threats by community members.

He said his family have previously complained about being victimised by community members, who had been demanding ownership papers of the house in recent months.

Ncube told TimesLIVE that his family lives in constant fear.

"It was about 2pm [on Saturday] and my wife and I were watching TV when we heard a knock at the gate. When I went to investigate, I saw a group of people standing at my gate demanding that I open and let them in," he said.

Ncube alleges that he identified many of the people as being the ones who had tried to evict him in May.

'You can take me out of my house when I am dead,' says Alexandra resident facing mob eviction

An Alexandra man says he is willing to die for the house he was rightfully allocated by government - this after community members tried to evict him ...
News
3 years ago

"They started hitting the main gate with whatever they had. I then opened the gate because some of them were jumping over the wall."

Ncube said this is when the mob attacked him.

"They hit me with sticks and the one guy used an axe to hit me at the back of my head. They were saying to me that this house is now theirs. When I woke up I found that I was covered in blood and on the ground." 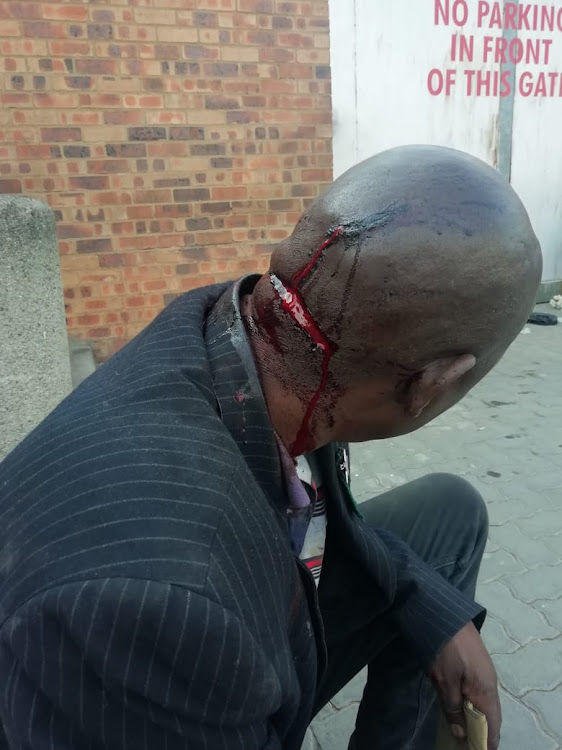 Gibson Ncube sustained serious injuries to the back of his head when he was allegedly hacked with an axe during an attack related to ongoing issue of eviction
Image: Melissa Ncube

Ncube said he mustered the strength to get up and walk to the police station, where his wife found him after narrowly escaping the wrath of the mob herself.

"The police called me an ambulance and I was taken to Masakhane Clinic for treatment. When we were done I went back to the police station and they opened a case of assault."

Police then escorted Ncube to his home, where he alleges his attackers had been inside drinking alcohol and playing loud music.

"They were partying at my home. They had thrown out all of our things into the street," he said.

Ncube applied for the house in 1996, five years after moving to South Africa from Zimbabwe. He moved into the home in 2010.

While he is currently unemployed, he previously ran a business where he sold clothes on the side of a road near to his home.

However, he was targeted and forced to stop selling any clothes, leaving him without any sort of income to support his wife and daughters, aged five and 14.

"I am very concerned. I am just happy that my children were not at home when I was attacked. I did not want them to see that," he said.

"They will appear at the Alexandra Magistrate's Court on Tuesday," said Dlamini.

"Police are saying that the housing department needs to assist them in investigation. I want to see justice so all these problems for my family can be resolved," he said.

Karabo Ditire was washing his two-year-old daughter's clothes at his shack in Crosby's Slovo Park when a bullet, allegedly fired by a Somali ...
News
2 years ago

Provocation or sheer madness? Two sides of the xenophobia tragedy

Dr Samir Saha has had nothing but love for his patients and the two South African assistants he employs.
News
2 years ago