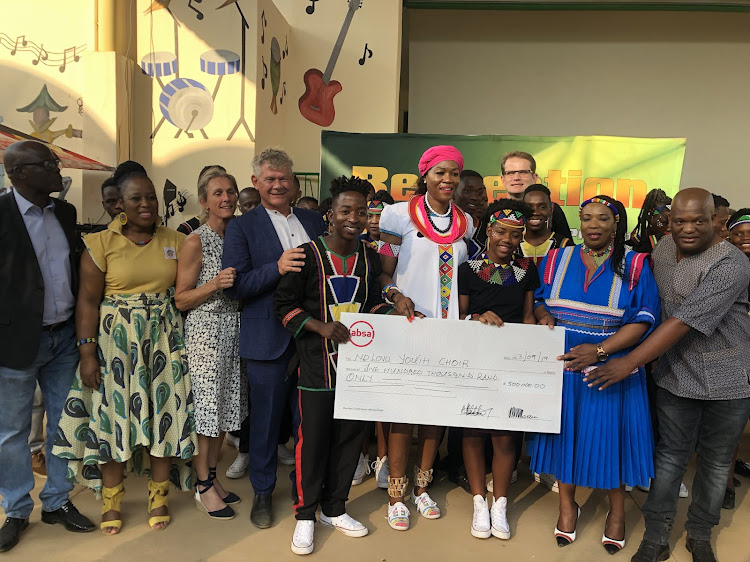 The Ndlovu Youth Choir received a R1m cheque from the Limpopo arts and culture department on Monday.
Image: @ChoirAfrica via Twitter

Despite losing out in the final of America's Got Talent, the Ndlovu Youth Choir received a prize from their home province just days after they landed back in the country.

On Monday, Thandi Moraka, Limpopo sport, arts and culture MEC, awarded the choir R1m after their achievement of making the finals of what is arguably the world's biggest talent competition.

An appreciative choirmaster Ralf Schmitt, who described the payment as an "amazing gesture", joked that it was still R14m short of what they would have made had they won the competition and claimed its $1m prize.

"The money will be shared among the team. They deserve it and they've worked hard. We're very happy. It's been hectic, we have not yet rested," Schmitt said.

The homecoming celebration was hosted by the MEC at the Ndlovu Care Group Miracle Centre. The choir was welcomed by members of their community and government officials on Monday.

Moraka said half of the money will go to the choir members, while the rest will be used to develop their music programme.

When they arrived at the OR Tambo International Airport on Friday, Schmitt, who was dishing out hugs with a huge smile on his face, said he felt "amazing".

"I can’t breathe," he said. "I envisage a beautiful and exciting future for them. But there’s also a leadership responsibility. It must be sustainable and result in employment. They have so much potential. They have an exciting future."

The choir was returning from their six-week trip to Atlanta, USA, where they made it to the final of AGT. During the final results show they performed Higher Love and Can't Hold Us! with fellow finalists the Detroit Youth Choir, DJ Kygo and Macklemore.

The South African flag flew high and the crowd was euphoric as the Ndlovu Youth Choir arrived at Johannesburg's OR Tambo International Airport on ...
TshisaLIVE
2 years ago

Through his efforts on behalf of Moutse village, doctor/philanthropist Hugo Tempelman accidentally brought the dazzling voices of the Ndlovu Youth ...
Lifestyle
2 years ago

The Ndlovu Youth Choir flew the SA flag high on America's Got Talent. Here's why we loved them
News
2 years ago