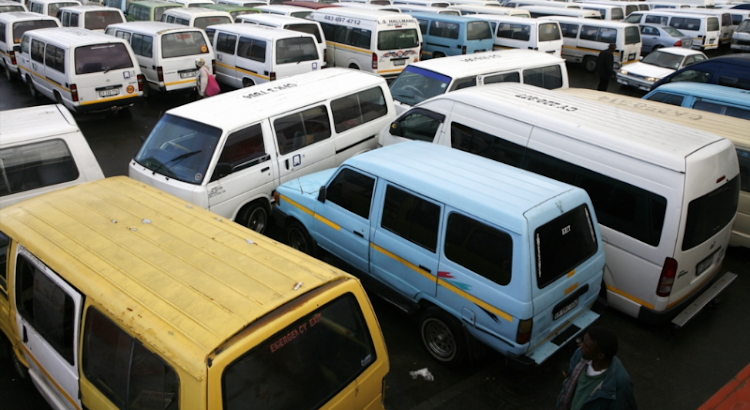 Cape Town taxi owners have denied responsibility for the stoning of and damage to cars that brought the N7 to a standstill on Friday.

The Dunoon Taxi Association downed tools in protest against the impounding by city officials of vehicles operating without permits.

During the afternoon, TimesLIVE witnessed youths of schoolgoing age and adults blocking access to the township and pelting cars in Koeberg Road with stones and boulders.

JP Smith, the mayoral committee member for safety and security, said the unrest started earlier in the week after traffic officers cracked down on taxis.

Vehicles were stoned as violent protests flared up for a second day on Friday at Dunoon in Cape Town.
News
1 year ago

"Taxi drivers and owners believe that they should not be fined or arrested for offences and that the city should engage them first in discussions about these offences," Smith said on Friday.

"This is a preposterous proposal. Public transport operators and owners need to realise that the law applies just as much to them as every other motorist and that they have a larger burden of responsibility than anybody else on the road. Their conduct is a disgrace."

Traffic officers were attacked and Smith called on police to arrest perpetrators of the violent acts.

"The violence, injuries and damage to public and private property cannot be condoned, and the city calls on the SAPS to arrest those responsible," he said. "The city strongly condemns the disruption to motor vehicle traffic and commuters yesterday and today as well as the cowardly attacks on private motor vehicles by so-called protesters.

"We have also had at least two incidents where traffic officers have been attacked and we call on anyone with information about these attacks to come forward so that the perpetrators can be brought to justice."

Two traffic officers came under attack from taxi drivers at a Cape Town petrol station on Thursday.
News
1 year ago

Smith said the city had deployed 71 traffic officers and 52 vehicles to the affected areas to help with traffic management and cleaning of roads.

"The metro police department’s tactical response team has also been deployed, along with staff from other areas, to support the SAPS public order policing unit.

"The water cannon is currently undergoing repairs after electrical systems damage and we hope to deploy it within the next couple of hours."

Smith said he had demanded "extended and intensive lockdown operations around public transport in Dunoon" to ensure that the perpetrators understood that selfish, violent and reckless behaviour had legal consequences.

But the ward councillor for the area, Lubabalo Makeleni of the ANC, blamed the city council for the pandemonium, as did Dunoon Taxi Association general secretary Frank Qotyiwe.

"The reason for that chaos  in Dunoon is the city of Cape Town and the taxi association. The city is impounding taxis and the taxi owners are against that," Makeleni said. "Taxi owners are behind the strike. Children are also being caught up in this, just like many other opportunists. The taxi association has approached the city several times and there has been  no response."

Qotyiwe distanced the taxi owners from the chaos. He said all the association did was suspend the taxis for fear of them being impounded.

Taxi boss dies after his vehicle is riddled with bullets

A KwaZulu-Natal taxi boss was shot dead on Monday.
News
1 year ago

"We have been trying to engage the city, urging the authorities to give us operating licences for other taxi routes, but they have constantly turned a deaf ear and the only priority for the city is the MyCiTi bus service. The other associations on those routes supported us, there was no conflict," said Qotyiwe.

He admitted association members had been illegally operating taxis on a number routes across the city for years.

"We have been operating without permits for the past seven years, helping people," said Qotyiwe. "The routes include Dunoon and Cape Town, Dunoon to Table View, Dunoon to Melkbosstrand and many others.

"Yesterday we heard that a traffic officer was assaulted in Joe Slovo. A senior officer in this cluster called us to a meeting. We asked if they will continue impounding our vehicles and they could not give us a clear answer. We decided to suspend the taxis today.

"I am not sure about how the community feels but there is no child who owns a taxi. The passengers are stranded.

"We condemn the damage to vehicles which have nothing to do with the strike. All we did was suspend the taxis."

Protesters gathered to block roadways in Hanover Park and Bishop Lavis early on Wednesday, calling for an end to femicide and gang violence while ...
News
1 year ago

A taxi driver was arrested after he and his sliding door operator allegedly assaulted a traffic officer and a police constable on Thursday.
News
1 year ago