Humanitarian aid for Graaff-Reinet as thirsty residents fight for water 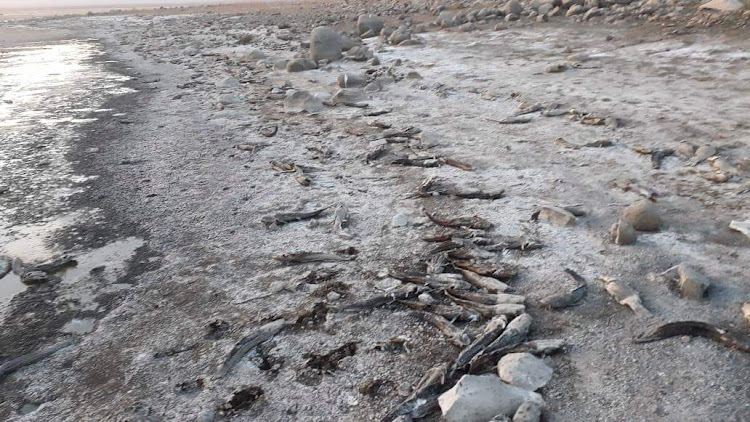 The Nqweba Dam in Graaff-Reinet has run dry. The smell of dead fish has been described as overpowering, and residents fight over every drop of water donated to the area.
Image: Facebook/Monique Warden

A water crisis in the town of Graaff-Reinet has seen the Nqweba Dam run dry, leaving behind an overpowering stench of dead fish while residents "fight" for water.

The humanitarian organisation Gift of the Givers has now intervened and is sending trucks of water, tankers, a drilling machine and hydrologist Dr Gideon Groenewald to the Eastern Cape town on Tuesday.

“Dead fish are visible everywhere, boreholes have run dry, desperate residents collect water from unhygienic drains, children are pushed away from water tankers as residents 'fight' for the little water that arrives,” Sooliman said in a statement on Monday.

He said the town was on its knees water-wise and drastic intervention was urgently required.

Tests done by the Council for Scientific and Industrial Research (CSIR) found that ground water in Stinkwater, north of Pretoria is unfit for human ...
News
2 years ago

The crisis has led to nearby residents forming initiatives to collect water.

"We had to control people fighting for water. Some adults even pushed away children collecting water," she told the publication.

On Facebook, Liesl King wrote: “Our dam is officially dry. The smell of dead fish is overpowering.”

Gift of the Givers said it had been asked by the national department of water and sanitation to act as a "rapid response unit" .

Sooliman said the intervention in Graaff-Reinet was an extension of other major water  interventions in the province.

“We are currently involved in Adelaide, Bedford, Queenstown, King William's Town, Nanaga and Makhanda. Butterworth is next,” he said.

"The main issue of supplying water to all communities is based on the simple reality that too little water reaches the main storage tanks in the lower lying areas to automatically let the booster pumps kick in to pump water to the higher reservoirs," he said.

This meant water was available in the lower part of the town but those living on higher ground had none.

"The solution lies in developing existing or new boreholes, managing known aquifers, supplying water at a rate that exceeds water use in low lying areas, allowing pumping systems to run effectively and fill high lying reservoirs as a matter of urgency, and drilling boreholes directly in high lying areas if the geography allows that.

"Dr Groenewald will deal with these issues," Sooliman said.

With Lesotho's Katse Dam at an alarmingly low level, Gauteng residents are being urged to conserve water. However, SA's water and sanitation ...
News
2 years ago

Last year Cape Town residents were coming to terms with having to queue for water rations. Those days seem a distant memory now, with news that dams ...
News
3 years ago