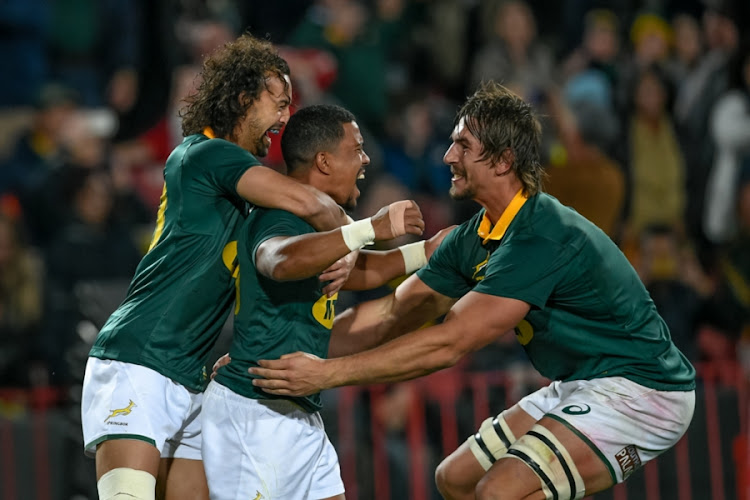 Eben Etzebeth celebrates with Dillyn Leyds and Rudy Paige during a match between SA and France in Johannesburg on June 24 2017.
Image: Anton Geyser/Gallo Images

He promised aggrieved residents the Springbok star would be used to “set an example” and said Etzebeth should be charged with attempted murder.

Jones addressed Langebaan residents on the eve of Friday's equality court bid to bring Etzebeth to book over allegations that he assaulted two men in the West Coast town in an altercation filled with racial abuse, including the h-word.

The lock forward, who was due to turn out for the Springboks against Italy during the Rugby World Cup on Friday, is also alleged to have pointed a firearm at four women during the incident, which began at a pub, Die Watergat, on August 25.

Jones’s remarks were cheered in the packed Seabreeze Community Hall, where mostly coloured residents gathered to hear about the SAHRC’s decision to take Etzebeth to court for alleged hate speech.

“We have mounted an offensive against racism and hate speech. The facts in this case suggest there is a case for Eben to answer,” said Jones.

“We have been told that this is not the first time Eben has done this. He has also managed to get away with it, but this time it stops here.”

He told the crowd former Bosasa executive Angelo Agrizzi “humbled himself” before him and repented after admitting he was a racist, and that Etzebeth could do the same.

“Remember he has money, remember the system is supporting him that’s why he is in Japan” about Eben Etzebeth, acting head of Hunan Rights Buang Jones @TimesLIVE pic.twitter.com/FQbjSI9h0c

“Here we have a criminal suspect who has been sent to Japan to represent our country. He is singing our national anthem. He should be in a prison cell in Langebaan. He should be charged with attempted murder,” said Jones.

He told the community Etzebeth would be given three weeks to file his responding affidavit and would then be expected to appear in court.

“You must be here with your placards. We are fighting a system,” said Jones.

He added: “The people who were assaulted gave up hope. It seems white people involved in crime get special treatment.”

A white resident stood up and accused Claassen of twisting facts to suit his agenda. “You and Mr Jones have declared Etzebeth guilty, but there is still a court process,” he said, to jeers from the crowd.

When other residents recounted stories of verbal racial abuse by their white compatriots, the pain driving the crowd’s anger became palpable.

Pastor Gert Moses said he grew up on a farm in Porterville being called a “hotnot” every day of his young life.

He tried to raise his two sons so they would never encounter racial abuse, but when Etzebeth’s alleged utterances became the talk of the town, he had to explain to them that people were treated with derision because of their skin colour.

“I grew up with the h-word and it’s a word that strains my heart muscles,” he said. 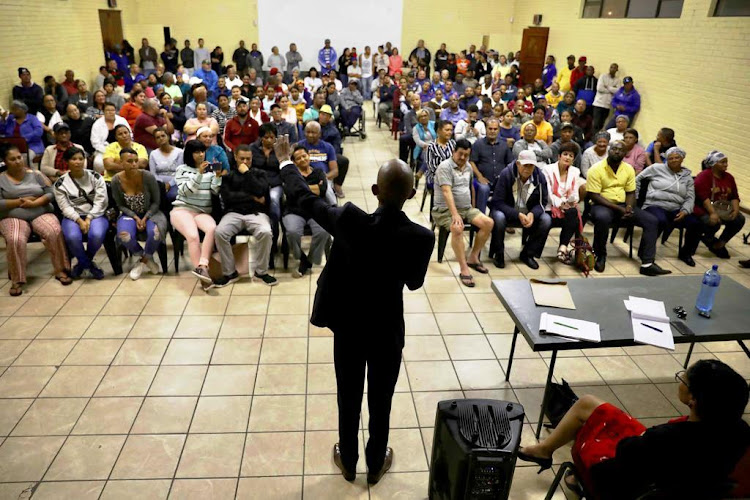 “Daily this word was used against us coloureds, so much so that you felt useless and that you could not get anywhere.

“I’ve made peace in my heart, but my son wants to know what this h-word means and I explained to him where it comes from and he feels it’s not right.

Etzebeth has denied everything.

“It is completely untrue and unfounded to claim that I physically or racially abused anyone in Langebaan, as has been reported on social media. Multiple witnesses can corroborate that.

“I am and will always strive to be a true ambassador to this beautiful rainbow nation and the sport that I love,” Etzebeth wrote on his Facebook page shortly after rumours started circulating.

It is completely untrue and unfounded to claim that I physically or racially abused anyone in Langebaan as has been...

Eben Etzebeth should have never gone to the Rugby World Cup with a dark cloud over his head and with the Langebaan assault allegations steadfastly ...
Sport
2 years ago