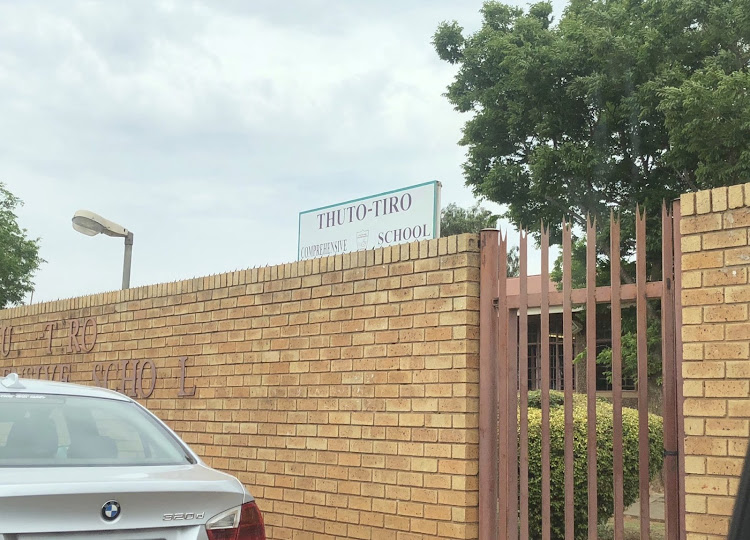 A pupil has been stabbed to death at Thuto-Tiro Comprehensive School in Sebokeng.
Image: Panyaza Lesufi via Twitter

A 15-year-old has been arrested for stabbing a schoolmate to death with a pair of scissors in Sebokeng, south of Johannesburg, on Monday.

A pupil was stabbed to death at Thuto-Tiro Comprehensive School in Sebokeng on Monday, the Gauteng education department confirmed. MEC Panyaza Lesufi visited the school in the wake of the incident.

"A 14-year-old was found lying in the bay at the school. Paramedics were called and the learner was declared dead at the scene," he said.

Gauteng education MEC Panyaza Lesufi has described the theft and wanton vandalism at schools as "emotionally draining".
News
2 years ago

A 15-year-old boy was arrested a short while later. "He will appear in the Sebokeng Magistrate's Court within 48 hours," added Funda.

Department spokesperson Steve Mabona said the boy was stabbed with a pair of scissors.

Lesufi earlier disclosed that the attack took place inside a classroom. He shared his condolences with the family and friends of the victim and the school community.

The Congress of SA Students (Cosas) condemned violence at schools in the wake of the incident and promised to continue calling on Lesufi and basic education minister Angie Motshekga to beef up security at primary and secondary schools.

"We condemn such barbaric and bad behaviour by learners," said secretary-general Mzwakhe Gwegwe, who was at the school with Lesufi on Monday.

"This also brings us back to where we have requested that security must be intensified at each and every school ... This will be a first step in reducing the crimes at schools.

"This tragedy is affecting all the people, from community members to parents, who send their pupils to learn, only to be receiving them as corpses," added Gwegwe.

A grade 6 pupil, shot dead outside a primary school in Ekurhuleni, was killed by a stray bullet, fired as attackers gunned down their intended ...
News
2 years ago

Four Durban teenagers accused of killing a Sastri College pupil are expected to make a bid for bail on Friday.
News
2 years ago

Gauteng education MEC Panyaza Lesufi expressed shock at the death of a 17-year-old grade 10 pupil who was killed at a school in Evaton in the Vaal on ...
News
2 years ago