Neigh, my bru - trio nabbed for selling stolen transformer from back of horse-drawn cart 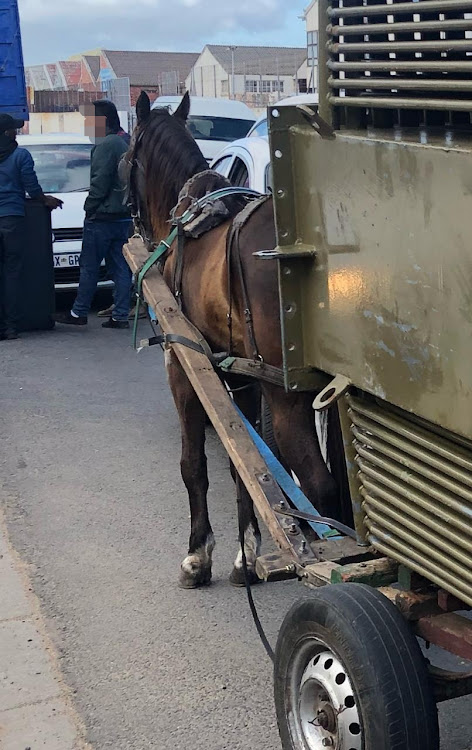 A horse, named Inspector, was used as a transport mule for a stolen electricity transformer in Cape Town. The three men who handling the horse were arrested.
Image: Supplied

Cape Town police on Tuesday arrested two men trying to sell a stolen electricity transformer from the back of a horse and cart.

City of Cape Town law enforcement spokesperson Wayne Dyason said that officers with the metal theft and rail enforcement units were on patrol in the Bellville area at about 9.30am when they received information that three men were attempting to "sell off a transformer at a scrap metal dealer".

They arrested the men who were, perhaps surprisingly, "on a horse and cart in possession of an electrical distribution transformer".

"Upon questioning it was discovered that the transformer was taken from the Transnet property in Maitland. The distribution transformer is valued at R1.2m, and this excludes labour costs to repair the damages," he said.

The three are set to appear in court on a charge of possessing stolen property.

"The horse, who goes by the name Inspector, was impounded by the Cart Horse Protection Association," said Dyason.

Vandals have hit the Cape Town railway network – resulting in the cancellation of 27 trains and massive delays during peak hours on Monday and ...
News
2 years ago

A man suspected of cable theft was found dead in a bush following a shootout with police in KwaMsane, in northern KwaZulu-Natal, on Thursday.
News
2 years ago

Eight arrested for stealing R500,000 worth of copper cables

Eight people have been arrested in Johannesburg for allegedly stealing copper cables valued at more than R500,000.
News
3 years ago

A Johannesburg Water official and a scrapyard owner were arrested for allegedly stealing cables worth R10,000 at the city's depot.
News
3 years ago