'It's Pravin Gordhan behind this,' says Iqbal Survé after his office is raided 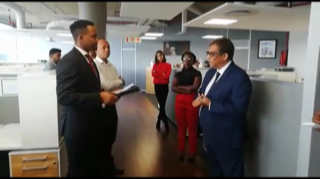 In a screengrab from a video posted on the Business Report website, businessman Iqbal Survé can be seen speaking to an official from the financial regulator at his Cape Town offices on Wednesday morning.
Image: Screengrab

The Financial Sector Conduct Authority (FSCA) on Wednesday conducted a raid at the offices of businessman Iqbal Survé, the chairperson of Independent Media.

The regulator said in a statement that the operation was part of an investigation into allegations of "prohibited trading practices (market manipulation)", which could be a contravention of the Financial Markets Act.

"The order for the search was granted by justice PAL Gamble of the Western Cape high court on October 8 2019. It allows the FSCA to conduct the search under the supervision of an independent attorney," said the authority.

However, Survé lambasted the regulator for the raid, which he described as a "political case".

Ayo tells the PIC to take responsibility for its own mess

Ayo Technology Solutions has denied claims it misrepresented itself before the state-owned asset manager invested R4.3bn in the company
Business Times
2 years ago

In a video posted on Independent's Business Report website, Survé said: "It's Pravin Gordhan behind this."

He accused the FSCA of obtaining a court order from a judge associated with the Democratic Alliance and Gordhan.

"You went to a judge who is a friend of the DA and Pravin Gordhan. This is purely a fishing expedition on your part," he said, speaking to an official from FSCA.

He also claimed that a first judge refused to give the court order.

In the Business Report story, Survé described the raid as "an orchestrated campaign" and a "fishing expedition" to prevent Independent from publishing stories that would expose Gordhan, the public enterprises minister.

The FSCA said it was mandated to investigate and, in appropriate instances, take enforcement action in cases of market abuse on the financial markets.

"This is to maintain the integrity of the financial sector by ensuring that all regulated entities, their key individuals and representatives always act in the best interest of the South African consumer," it said in a statement.

Iqbal Survé and Gill Marcus's heated exchange at the PIC inquiry had many people talking.
News
2 years ago

Just months before one of his companies defaulted on repayments to the PIC, Iqbal Surve splurged almost R140m on seven luxury V&A Waterfront ...
News
2 years ago

State capture rot is deep, says Gordhan - but R2.1bn has been recovered so far